It will leave an impression on you forever

If Tokyo has been on your travel itinerary for some time or you are planning to visit the city in the near future, then be sure to stop at Nezu Shrine.

The most alluring thing about this tourist spot is that it is a Shinto shrine that dates back to the 1700s. The place is well known for its glorious annual Azalea Festival (Tsutsuji Matsuri), held in April and May. According to indigenous beliefs, the shrine was built by the renowned priest Yamato Takeru no Mikoto for the deity Susanoo no Mikoto. Also, all the pavilions in the shrine were constructed under the command of Tsunayoshi Tokugawa between 1646 and 1709. It owes its fame to noteworthy literary dignitaries of the modern era such as Mori and Natsume who cited the place in their writings.

A visit to this shrine will leave an impression on you forever. The main spots are the shrine stage or the kagura-den and the main hall or gongen-zukuri that is adorned in red lacquer. The shrine basically consists of the main sanctuary (Hoden), the worship hall (Haiden) and the offering hall (Heiden). It has two gates called Karamon and Romon whereas the lattice-windowed wall is known as Sukibei. Its massive grounds are covered with vegetation such as cedar and gingko trees along with a carp pond. The place is particularly known for its wisteria and azaleas. It has 50 different varieties of around 3,000 azaleas.

The shrine, which is located in the Bunkyo ward of Tokyo, is a prime cultural spot and also has tremendous historical significance. The fact that it was built in 1705 makes the spot alluring for history buffs as most of the prime buildings over here date back to that period. Its grounds have a number of sites with historic connotation. There is a rock on which notable writers like Ogai Mori and Soseki Natsume rested while they were in contemplation. The two story main gate has Buddhist motifs. You must also see the pavilions like Karamon, Romon, Haiden, Honden, Sukibei and Heiden to sample the rich cultural heritage of the shrine.

The landscape over here is covered with colorful blooms and gongen-zukuri styled structures. Just walking around, will be an extremely enthralling experience. The best time to visit Nezu Shrine is in April and May as these are the months when the famous Azalea Festival is held. The azaleas, which are in full bloom during this time, make the hillsides look extremely breathtaking. The festival is held on the grounds and starts towards the end of April.

Find out more about Nezu Shrine. 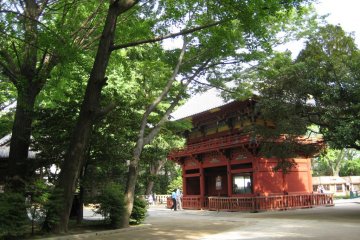 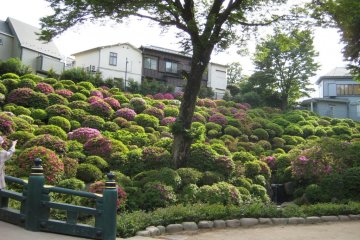