The Taito City side of the famous river

Sumida Park is a spot of green and space along the banks of the Sumida River straddling both Taito and Sumida cities. The Taito City area, Sumida Riverside Park, extends for several hundred metres along the river while the Sumida City part sees a large leafy area on its side.

Right by Asakusa Station, the Sumida Riverside Park is probably most famous for offering the some of the best vantage points for the incredible Sumida River Fireworks Festival - if not Japan's then certainly Tokyo's most celebrated fireworks event. The massive festival, held every summer, draws in hundreds of thousands of visitors who witness the spectacular display.

Sumida Park is also blessed with several hundred cherry blossom trees. Said to have been planted by the Edo Period shogun, Tokugawa Yoshimune, during the springtime season the blooming blossoms transform the park into one of Tokyo's major staging grounds for the ever-popular hanami cherry blossom viewing parties.

Outside of these events, though, Sumida Park still offers plenty. Martial arts buffs and fans of action will get the thrill of their lives watching traditional yabusame horseback archery at the park in April. Amateur historians will appreciate the park's monument to the devastating Tokyo air raids of World War II. Slightly more peaceful, perhaps, are the numerous baseball fields and tennis courts to be found along the river. Parents will also appreciate the children's play area which makes for a nice break from strolling.

Any visit to Taito City and Asakusa is bound to eventuate into a stroll through Sumida Riverside Park. With its great views of the river and the iconic Tokyo Skytree, it's no wonder why.

There are four Asakusa Stations, each with their own line. At a 1-minute walk, the most convenient ones to Sumida Park are the Asakusa Stations on the Tobu Skytree Line and the Ginza Line. 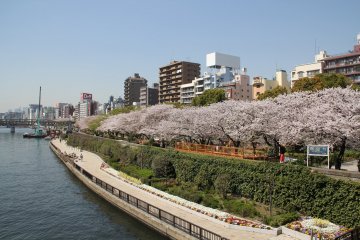 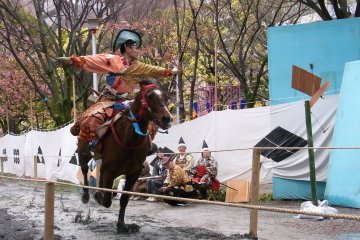 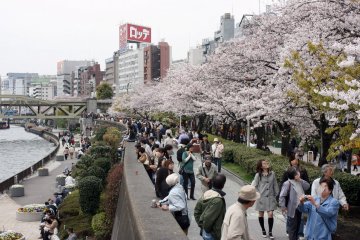