Not many people know this but sushi was one of Japan's original fast foods. Eaten on the go from street-style stalls, it's somewhat ironic that modern standing sushi bars would seem a novelty to some given that sushi was originally eaten in this way. But there you go, the changing times.

Like most standing sushi bars, Sushi Cyoh is not large, catering as it does to about twelve or so people. It was winter when I ate there so the atmosphere was cosy and comfortable. Fun, too, as the chef was quite engaging with his sushi chit chat. If the Japanese language is still a maze for you, then the wall behind the counter listing the menu items in both Japanese and English will help. Lunchtime sets of ten pieces of sushi are available for less than JPY1000. That is seriously cheap.

Slightly more 'expensive' exotic ten-piece sets can also be had. Now, expensive in this case means JPY1300. Add in several several more a la carte selections of about JPY150 per piece and my lunch here at Sushi Cyoh came to a very light JPY2300. My wallet was pretty much unaffected by my visit here. There weren't any surprises this day, with staple sushi fare like fatty tuna (otoro), sardine (iwashi) and egg (tamago yaki) featuring. The herring roe (kazunoko) also caught my eye, as it's a traditional New Year period delicacy, and the snapper (tai) was textural.

Sushi Cyoh is a simple and enjoyable standing sushi bar in Tsukiji. And as one of Japan's traditional go-to cuisines, the sushi here is also extremely affordable. For those on the go, it may be just the place to get in, eat, smile and leave.

Take the Tokyo Metro Hibiya Line to Tsukiji Station. From Exit 1, head right. Sushi Cyoh is less than a one-minute walk down the road, opposite Starbucks. 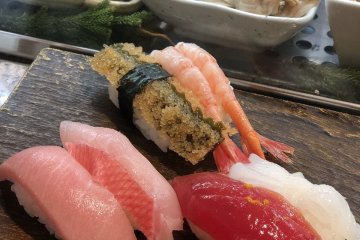 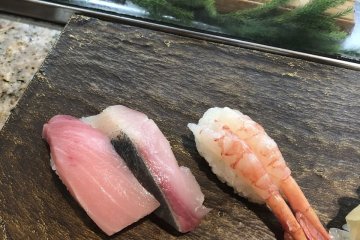 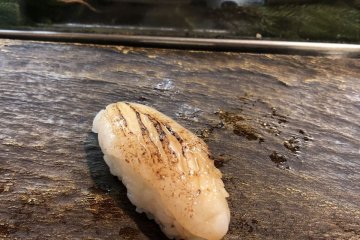