The Power of Sumo

The ritual thrill of a national sport

With some of the sporting world's greatest behemoths charging at each other at incredible speed, you need to pay attention in sumo. Clashes between wrestlers can literally last no more than a few seconds. The energy of the bouts is intense and though often brief, the tension and excitement generated is very real.

Recent tournaments have provided some top notch entertainment for fans. Hakuho - arguably the greatest sumo wrestler of all time - wins tournaments with perfect records while Tokushoryu's fairytale championship victory brought tears to the normally stoic rank-and-filer. And then there is Enho, a crowd favourite whose pixie bulk energises entire stadiums with his imaginative means to victory. There is no doubt that sumo is a thrilling tournament-to-tournament adventure.

Along with the action sits tradition. Centuries of it has cemented sumo as possibly the most intriguing merger of sport and ritual in the world today. Said to originally have been part of Shinto religious ceremonies, sumo retains much of its sacred appeal. For sure, sumo as sport dominates the headlines, but it may be that sumo as ritual is what gives those headlines value.

Whether or not you see these rituals as a modern psyche-out in ancient form, the result is always a solemn tension that is mesmerising; the yokozuna grand champion-only ceremonial dances, the obligatory samurai chonmage hairstyles, the shubatsu salt throwing ritual to purify the ring, the dohyo-iri ring entering ceremony...

There is no denying it; sumo is captivating. If you do blink and miss a bout, though, then at least you'll have the power of centuries to enjoy.

Professional tournaments are held throughout the year at: 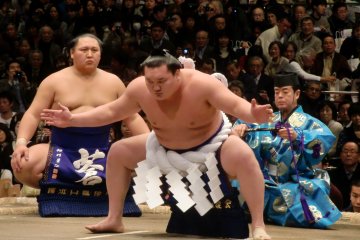 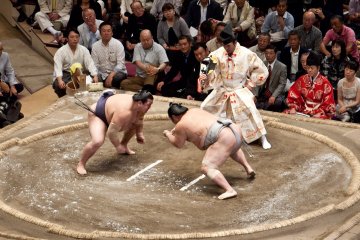 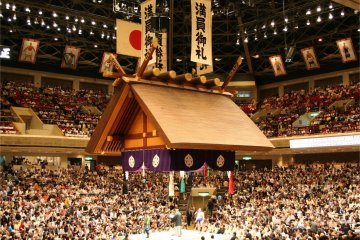 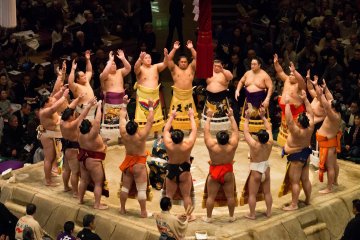