Kabuki is a traditional Japanese performance art performed by men that have often trained in the art for well over a decade. You can imagine my surprise then when I first saw children just over a decade old performing skilled kabuki—in the snow, no less! Every February outside Sakata, a major city of Yamagata Prefecture is the village of Kuromori. The tradition of training young future actors and having them perform at the local shrine has been an annual event for many years.

Mid-February marks the New Year of the lunar calendar (i.e. Chinese New Year). Many local villages still celebrate this “small New Year” because it is a time to pray for a good harvest for the coming spring. The best way to receive the attention of the local deities is of course have fun and put on a show that is as much for them as it is to the public. Unfortunately for visitors, this means you will have to brave the cold weather and probably snowfall to enjoy it.

The event is held at a shrine, a rarity these days in a Japan with more comfortable theaters easily accessible. Before the performance, an actor performs a slow dance while dressed in a mask. This Kyogen dance was initially performed before all kabuki plays to purify the stage, actors, and audience. This is also a rarity in Japan. The performances may be performed by children, but there is no fun and games. The kabuki here is very traditional and taken seriously.

While the Kyogen dance was on, I took time to explore my surroundings. Some friends and I enjoyed the local saké the locals offered us and sampled some of the food products. The strong alcohol is served warm. A few sips and you instantly forget how cold the weather is. Just then an elderly man came up to our social circle and asked if we wanted to meet some of the actors. We certainly said yes!

Next to the stage is a shrine which served as the day’s dressing, prep, and rest area for the performers. Between the backstage and the shrine a plank walkway was set up where you can view the actors in their final moments before or after being on stage. We took off our shoes and stepped inside the warm walls. Children in full white make up and costumes gave me a bit of a startle as they greeted me while my eyes still adjusted to the inner candle-lit shrine. After some quick photos, we were invited to a backroom to drink with village elders. I felt like a VIP, but I think any traveler with a friendly smile and some kind words could get the same treatment.

The performance was amazing. The children’s voices were low pitch and loud, just like the professionals. Then again, I was told the children have been practicing over a year just for this performance. Annual performances occasionally change. The performance I saw focused on the lives of five bandits. My favorite scene was when ten Edo police officers fought the five gangsters. The fight consisted of very stylized movements and was full of dramatic poses. Costumes and a beautiful set design complimented the performance. It was worth standing in the freezing cold.

Kuromori can be accessed by taking the Shonai Kotsu bus from JR Sakata Station. After 25 minutes, exit at the Chukuromori bus stop. 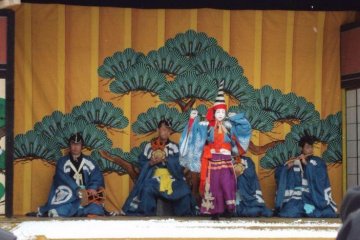 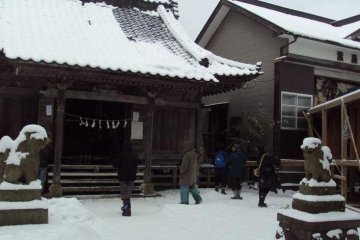 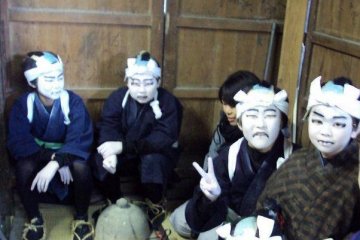 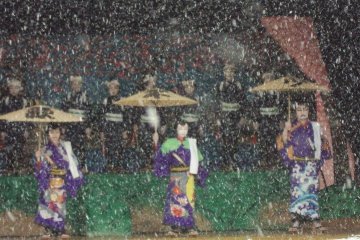 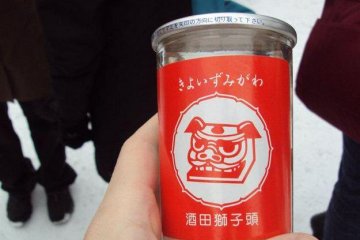 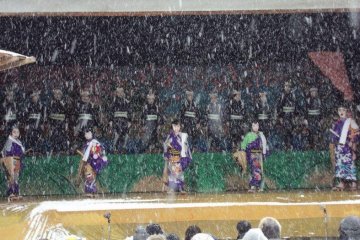