Where samurai swapped their swords for hoes

At the dawn of Japan’s Meiji Era (1867-) samurai lost their warrior jobs but some of them made a swift transition and became entrepreneurs in Japan’s modern era.

This was the case in Matsugaoka where 3,000 samurai became silk worm entrepreneurs–an impressive job change, isn’t it?

The shogun that ruled over Japan since the mid 17thcentury was overthrown and a new government was formed to lead Japan into a new era called Meiji, or “enlightened rule”.

What to do if you are not allowed to swing your swords anymore and chop off people’s heads? With no Job Centers around, the samurai of old had to think hard about how to fit into the new society that did not need any warriors anymore.

Some 3,000 samurai of the Shonai Domain, which is the area around present-day Tsuruoka City in Yamagata Prefecture, actually decided to swop their swords for hoes and cleared some 225 hectares of wasteland.

They then cultivated mulberry trees whose leaves were used for raising silk worms at a newly established silkworm nursery which became the center of a flourishing silk industry in Shonai.

This cocoon nursery was built in 1875 and it consisted of two-storey wooden buildings with small vents on the roofing tiles which were actually taken from Tsurugaoka Castle which was dismantled in 1875.

This took place at Matsugaoka, a small village near Tsuruoka City in Yamagata Prefecture. The land that was cleared by the samurai-turned-entrepreneurs is still there and some locals told me that the descendants of those samurai still live there today.

What is left of the silkworm nursery, are five large wooden buildings that once housed the silkworms. There is now a small museum called the “Matsugaoka Reclamation Memorial Hall” in one of these buildings. It is dedicated to the samurai silkworm pioneers and it explains how the silkworm nursery worked and there are displays of equipment used at the time.

End your day trip to the Shonai Eigamura and to Matsugaoka with a drink and a light meal in atmospheric Matsu Café housed in another of the old wooden buildings at the ex-silk worm nursery in Matsugaoka.

If you are lucky, the café’s owner, Sakai Tadayori, is at hands. The entrepreneur with a broad smile is the 19th Lord of Sakai, the powerful daimyo family who once ruled over the entire area, and ladies, at the time I met him, he still was a bachelor! 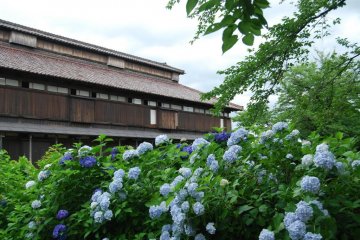 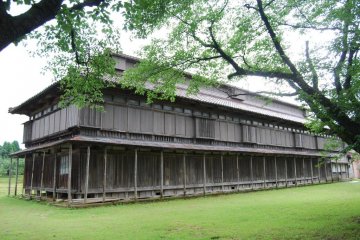 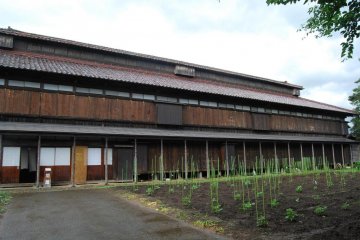