Kurokawa, a small village in the mountains near Tsuruoka in Yamagata Prefecture, is preserving a 500-year-old tradition of Noh theater, a form of classical Japanese theater.

Once a year at the beginning of February a big Noh festival takes place here when the two Noh groups of the village perform Noh a whole night long.

The two groups are called Kami-za and Shimo-za and they are united in the Kurokawa-Noh Hozonkai (Kurokawa Noh Preservation Association).

Each season sees the performance of different Noh pieces, which is decided in a big meeting of the two guilds held on January 3rd. From this day on until the day of the show the performers don't eat meat and fish.

Performances take place in old farm houses that belong to Kurokawa families. Each year different houses are chosen and prepared by the owners of the houses for hosting about 50 people on each night on February 1st and 2nd each year.

The Kurokawa Noh is special and tickets for performances are issued by lottery. I was lucky to get a ticket to watch a superb Noh performance of the Kami-za for one night in February.

The evening starts with guests making their way to register at the Kurokawa Noh Museum. They are greeted by man-size candles bearing the Kanji for "kami" and "shimo", which represent the two Noh groups.

Guests are received at a reception table where they go through some rituals of greeting members of the Noh groups and eating a tofu dish prepared by the women of the groups.

All guests wait in a large hall until they are taken to the houses where the performances take place.

While waiting, you have a chance to admire Noh masks and Noh dolls which are for display at the Kurokawa Noh Museum. They give a glimpse of what treasures the two Noh guilds hold. They are said to own 250 Noh masks and over 500 Noh costumes.

This Noh museum is small and modest; the real attraction in Kurokawa is attending a Noh performance.

Enquiries (in Japanese only): 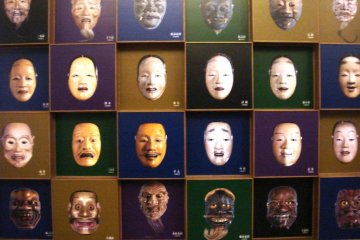 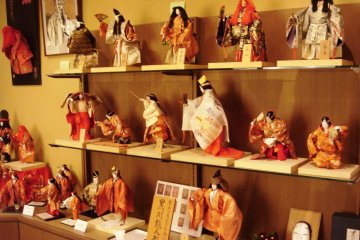 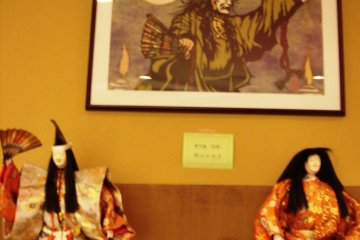 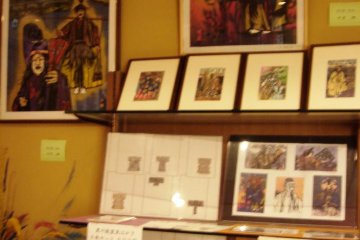 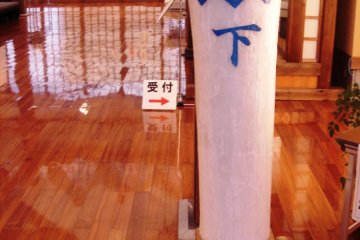 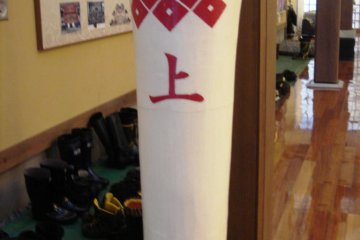