The Gem of Japanese Traditional Culture

First we went to the “Akita Museum of Art”, from Akita Station to the museum was only a 10 minute walk on foot. The weather this day was just great – snow storms, and everywhere was covered in fresh powder snow. Although it was a little difficult to walk through the thick layers of snow, winter in Akita without snow would just be like having sushi without soy sauce.

The museum has a modern façade: concrete wall with the name of the museum, nothing fancy. Entering the museum, first you would see long stairs connecting first and second floor, the spacious lobby is being lit by the sunlight coming in from the glass triangular ceiling. This museum is one of the masterpieces designed by Professor Tadao Ando. Prof. Ando is one of the greatest architects in modern Japan, who is also an honorary professor in Tokyo University. He is also a notable figure in the global architecture field – his work can be found all across Japan. Recently, more tourists are visiting Japan just to look for his work and appreciate the philosophy behind. I could never imagine that here I could encounter one of the Prof. Ando’s masterpieces.

Akita Museum of Art is not just about art, but also history

There are 3 floors in the museum. The first floor shows a collection of arts created by locals. The theme changes regularly. The main area is located on the second and third floors. The most famous collection here is a huge painting, located on the second floor, called “Akita no Gyoji”. It was completed in 1937 by a well-known painter Tsuguharu Fujita (1886-1968). Fujita was asked by a local businessman Masakichi Hirano to make this painting. The painting is composed of 5 sections, with length and width of 3.65 m and 20.5 m respectively. The painting deliberately incorporated the daily lives and festivals celebrations of Akita into one frame. If you look closer you will realize the painter has also portrayed the four seasons of Akita. Such a massive painting, I thought it probably took him a while to finish; then the staff told me that the painting only took 15 days to complete! However, due to the happening of wars, this painting was locked in the storage for 31 years before it could finally be shown publicly.

Besides “Akita no Gyoji”, other collections in the museum also have long history. The paintings mainly portray scenery and daily lives. Among all the painters exhibited in the museum, the artist who was born the earliest is Okyo Maruyama (1733-1795), while the latest is Torajirou Kojima (1881-1929). From these paintings that have lasted for over a century, we could find out how people viewed the world, before the era of photos.

We had udon for lunch. Inaniwa Udon from Akita prefecture is one of the top 3 udon in Japan, together with Sanuki Udon from Kagawa prefecture (aka “udon prefecture”). What makes Inaniwa Udon so special is how the noodle is made. Compared to the typical udon which is rounder and thicker, Inaniwa Udon is thinner and smoother because the noodles are hand-stretched. Due to the intensive processes, Inaniwa Udon is pricier than other udon. In Edo Period, it was hard for commoners to get access to Inaniwa Udon, so nowadays some Japanese still tend to choose Inaniwa Udon as a luxurious gift.

If you get to visit Akita, don’t forget to give this Akita locality a try!

After lunch, we set out to Oga Peninsula, which is about 1 hour drive from Akita City. We came here to participate in one of the Tohoku 5 Snow Festivals “Namahage Sedo Festival”, which is also recognized as an “Important Intangible Folk Cultural Properties in Japan”.

Namahage, in kanji (Chinese character) literally reads something like ‘‘raw stripping monster’’, which sounds a little violent. According to Wikipedia, Namahage is a type of devil creature, which goes from door to door for food and drinks, and scares the people inside. On the way there, I was wondering who would turn such a story into a festival. But afterwards I realized Wikipedia has made a mistake blaming Namahage.

Namahage Festival takes place at Shinzan Shrine in Oga Peninsula. Right next to the shrine, there is a Namahage Museum, which introduces about the culture. Since I had no idea about Namahage, for sure I could not miss it. As soon as I entered the museum, there was a bloody red Namahage statue waiting for me at the entrance. Namahage has a hideous face, in a straw outfit, holding a wooden kitchen knife and bucket. The museum also shows a clip introducing tradition: on every New Years Eve, young men in the city would dress in Namahage costume. They run into houses yelling, “is there any naughty kids?” and scare the kids into tears.

“Messenger of God” from the Mountains

Arriving at the next exhibition room, there are countless Namahage with different faces. The staff told us about the Namahage culture and history. In fact, locals in Oga think that Namahage is definitely not devil but instead they are messengers of god from the mountains to tell people not to be lazy. In Japanese, Namahage does not have kanji, but when it got translated into Chinese it was coined into something like “raw stripping monster”, which sounds the closest. “Raw stripping monster” is not a proper translation for Namahage. In the old days during winters, locals in Oga liked to spend time next to the fireplace. If they stayed there too long, their skin would get rash because of the heat. To Namahage, these rashes represent laziness, so Namahage needed to come and “rip” the rashes off, so Oga-ers can work hard in the coming year.

Until today, Oga locals still treasure this local culture a lot, and they still do the Namahage tradition. They even built a museum next to the Shinzan Shrine, and hold a Namahage Festival every year to spread the tradition and the philosophy.

Next to the museum, there is an old traditional hut. Visitors can experience the “Namahage Visit” on New Year’s Eve: a messenger will first drop by to notify Namahage’s coming. When Namahage arrives, the head of family would set out a feast for the Namahage, to thank for all the protection in the past year. In return, Namahage asks about the situation of the family, then looks for the kids, and scares them to keep up the hard work. Just a friendly reminder, if you have the chance to visit, be prepared to be surprised when Namahage appears!

A secret place that brings you out of reality

It was a short walk up the mountain from the museum to reach Shinzan Shrine. The festival takes place at the square by the main shrine. Brisk music was played at the snow-covered square, while everyone was busy preparing for the festival by the great bonfire. I felt like I was brought into the world of the game “Monster Hunter’’, or that of the movies created by the movie master Hayao Miyazaki. Everywhere you could feel the energetic vibe and mystery.

The festival started at 6pm. Shinto priest and shrine maiden moved towards the altar for the ritual of Chinkama-sai, as the opening of Namahage Festival. A group of unmarried adult men were standing on the stairs by the shrine, receiving the “soul of Namahage”. At the moment they put on the mask, they turned into Namahage, and started to set out their way to the mountain and prepare to return to the venue later. At the same time, dances and taiko performances started, to pray for safety and harvest. There were also different booths around the venue selling snacks like oden to make your festival experience more enjoyable under the dancing spark and snow.

I went to a booth for hot dog omelet, and started to chat with 2 local ladies there.

Before I could answer, she already poured me a cup of coffee. Then we talked for half an hour. People in Akita are much simpler than that in Tokyo. They treasure human relationships and don’t hold particular cautions even against strangers. It makes me feel warm and comfortable.

When I returned to the main venue. it was the time when the Namahage got back from the mountain. It was the climax of the festival. A group of Namahage, with torches in their hands, walked around at the venue and scared the guests. The atmosphere got very lively, and the guests rushed to receive blessing from Namahage. At the end of the festival, Namahage mingled with the guests and everybody took pictures together to celebrate the moment.

Akita, sorry for looking down on you!

I used to think Akita was countryside without anything special. However, this time even though I have only been in Akita for a day, I did not only feel the charm of Akita, also I saw a totally different Japan.

At Akita Museum of Art, I saw the perfect fusion between modern and classic. The charm of classic artwork blends perfectly into the modern architecture, giving a new and refreshing image. In Namahage Festival, I learned the depth of Japanese culture. I used to get an impression that Japanese traditional culture is more about details, quietness and elegance. But while I was here, I felt so much energy. Also, this festival does not give the scent of a commercial event. All the staff cherish their local culture and the bonds in their community. Maybe it was because of this mindset, this culture can still be preserved and promoted so well, without impurities. 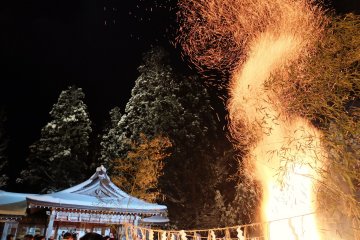 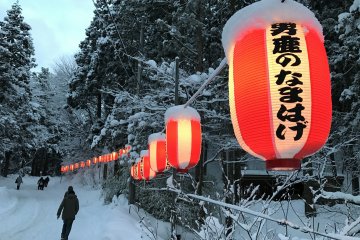 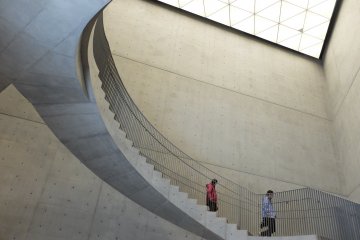 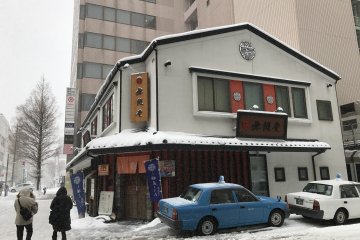 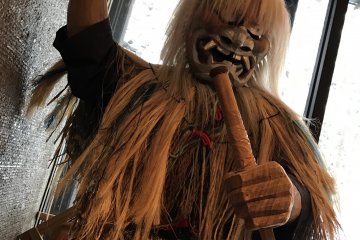 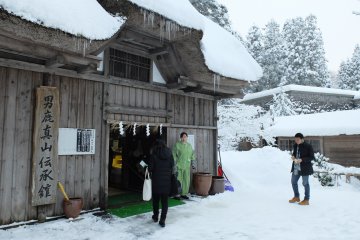 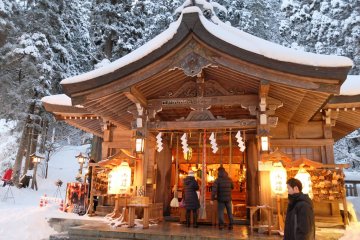 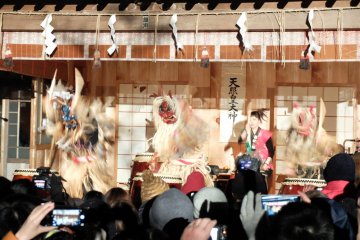 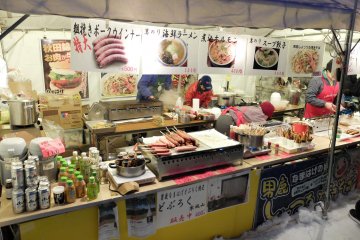 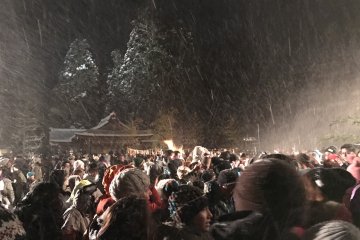