Stay sane as you go crazy over games

The 2019 Tokyo Game Show did not disappoint fans with the many games and announcements. But it can be a little overwhelming for first-time visitors—what with all the lights, the sounds, the ... everything. So, here’s what you need to know and remember if you’re heading to the Tokyo Game Show next year.

1. Getting a coin locker

There are coin lockers for use near Kaihin Makuhari Station as well as near the convention hall (around the press entrance before you can enter TGS) but beware—these tend to fill up quickly and they’re limited in size. A small, hard suitcase won’t fit in the lockers and you’ll end up having to wheel it through the crowds.

We have to face facts: the halls are not well ventilated and it can get hot inside. With that many bodies going back and forth to the next hit game stand you're bound to work up a bit of a sweat. We recommend some light deodorant and perhaps even some summer seat sheets to wipe your arms and neck down, leaving you feeling cool and refreshed!

Most of the booths you will pass by are handing out packets of goodies. These range from clear folders, high-quality posters, paper fans, stickers, and more. You'll definitely want a place to keep all these things, and while some booths even hand out large plastic bags these too can be major collector items. A sturdy backpack would serve you well. It's also a great way to hang onto any trash you make to keep the convention center clean!

It seems like a no-brainer but don’t forget your camera! With all the awesome costumes and booth displays, you’ll want to remember your time at the TGS. The inside of the convention halls are a bit dim and flash isn’t allowed, so if you want good photos you might want to bring something a little better than your cell phone.

The Tokyo Game Show opens at 9:30 (doors open at 9am) and some people line up as early as 6am! To avoid standing in line for a long time we recommend arriving around lunchtime. Not only can you grab a bite outside (where prices are lower) but you'll also miss out on the bulk of the wait times.

Once you've conquered the lines outside, you'll face your next challenge-the lines inside! It might seem like an endless amount of time standing around but bring a handheld gaming device to pass the time. And definitely bring a drink or two into the hall. While there are vending machines inside they can sell out fast and they tend to be spaced out and crowded.

There's so much to see and so much to do and you only have until 5pm! Why would you ever take a break? Well, there's plenty to see while you're sitting around as well. Between each of the large blocks of halls there's an open-air space (ah, sunlight and fresh air); many cosplayers convene here and will pose for pictures if you ask. Not to mention, standing in all those lines takes a toll on your stamina. So, rest up, gamer, then get back in there and continue on!

Who doesn't love buying some loot to remember your time at TGS? Or better yet, merch with your favorite game? There are plenty of shops for you to look at all gathered together (check the map). But these shops are a little different. The various goods will be on display, usually numbered, then you get an order sheet and pen from a nearby staff member. Mark down how many or what size you want and then line up to go to the checkout counter. If you need help, ask-a lot of the staff speak English. And don't forget your cash!

9. Use the official app

Don’t want to carry around that newspaper-like map? There’s an official app with the times for shows, map of the halls, and even menu items. It’s easy to download but there’s a downside—it’s only in Japanese. Here’s hoping the official app gets a language upgrade for next year!

It's time to check-in to your hotel or you want lunch outside the convention? No matter what the reason, maybe you want to leave the convention site for a little while-but you'll be back! In that case, don't forget to get your hand stamped before you step out. That little stamp will let you re-enter the site faster and without it, you'll be shelling out more money for another ticket. 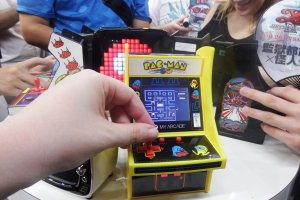 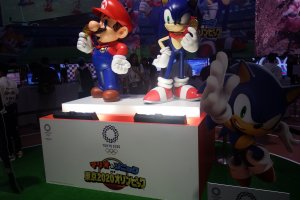 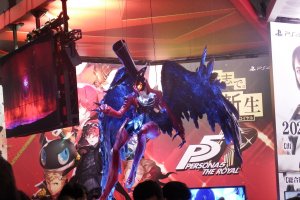 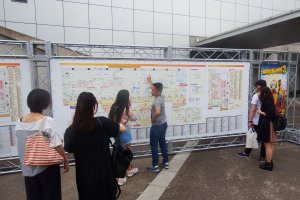 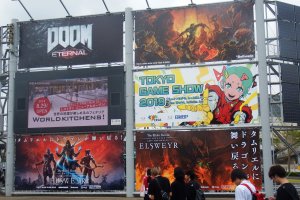 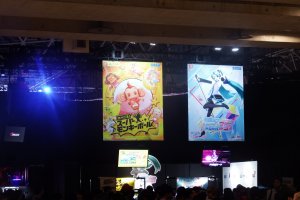