Japan in the middle of America

With about a third of the city taken up by the US Air Force Yokota Base, Fussa City is an interesting cross-cultural experiment. An obvious appeal to fans of American culture, the city's history and associated landmarks still manage to include quintessential Japan. Here is a brief introduction to some of the history and landmarks of Fussa City and how to reach them.

Situated right across from the US Air Force Base, the uniquely quirky Base Side Street is a collection of shops and restaurants full of flavour and life. Plenty of American-themed eating to be had here, with the street offering up classic burgers, pancakes, and bagels all with flavoured with the attendant retro atmosphere.

A 10-minute walk from Ushihama Station on the JR Ome Line.

An icon of the area, the Ishikawa Sake Brewery has been in business since 1863. Making use of local groundwater with which they brew their own sake, the brewery offers free tours in both English and French, as well as a freshwater spring from which water can be taken. The buildings are as old as the business, adding an authentic aesthetic to the place.

A 14-minute walk from Hajima Station on the JR Itsukaichi & Ome lines or the Seibu Hachiko & Hajima lines.

Despite its somewhat tiny size, Shimaya no Taki, a trickle of a waterfall, has managed to endear itself to the local residents thanks to its lovely sound. Flowing even in winter, this quasi-waterfall is thought to have the most output of any spring in the city, though visiting it requires some commonsense caution due to its location by the side of a road.

A 9-minute walk from Ushihama Station on the JR Ome Line.

Both historical icon and culinary go-to spot, Stuben Otama serves up European casual dining with a special emphasis on pork meat. Using traditional German culinary and additive-free techniques, and domestic Japanese pork, the restaurant was established in 1932 with some of the earliest German migrants looking for an authentic taste.

A 3-minute walk from Fussa Station on the JR Ome Line. 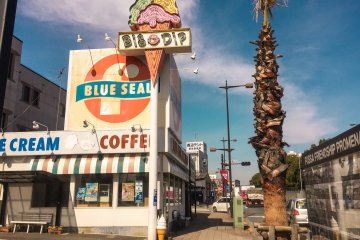