Plenty of foreign tourists make Hiroshima one of the stops on their journey through Japan - in fact, the very first question I was asked on my first trip home, at a school reunion, was “Have you been to Hiroshima or Nagasaki yet?” I put aside the regrettable pronunciation of both cities and told the inquirer that I hadn’t, but I was hoping to go there eventually, though as a foreigner I felt a little uncomfortable about it. I had to do a little bit of soul-searching after I had returned to Japan.

A visit to the A-Bomb Dome seems to be on many visitors’ to-do lists while in in the country - whether to educate themselves, pray, or even simply satisfy a sense of morbid curiosity, many of the foreign tourists whom I spoke with in Japan included Hiroshima on their itineraries. I wasn’t sure how I felt about seeing the Dome firsthand, though; especially when a Japanese co-worker commented “You’re thinking of going to Hiroshima? But why? Isn’t it depressing?”

I decided that rather than visit Hiroshima just because it was what everyone did, I would go during cherry blossom season, and take some time not just to see the museums, but to enjoy the tranquil beauty that the city offers during hanami. Every city with cherry trees is beautiful during the blossom viewing season, and Hiroshima is no exception.

The area has several other highly-recommended spots, such as the Shukkei-en Garden and Miyajima, but for me there was almost no question about where to see the blossoms - Peace Memorial Park, also containing the Peace Memorial Museum that is a must for anyone visiting Hiroshima. This expansive park was built on the site of Hiroshima’s original downtown area and is a poignant sight in itself. It is usually populated, and during my stay it was just as busy as I expected for one of the first warm spring weekends of the year.

I visited the park first, to relax, and returned to it after seeing the Peace Memorial Museum. There is surely no better place in Hiroshima for one to sit and think while gazing out at the river. The cherry trees line the riverbanks on both sides, offering a splendid view of the treeline from anywhere even remotely nearby. Like many city parks during this time of year, there are sometimes a few stalls to buy street food from.

Even though it was a busy weekend in the park, perhaps because I visited fairly late in the cherry blossom season, there was plenty of space to lay out a groundsheet right under a blooming tree and enjoy the way the petals settled onto it, and into my clothes and hair.

The river was alive with kayakers and pleasure boats, and despite my nervousness before coming, the welcome I got when I did end up talking to a resident - the elderly couple on the neighbouring patch of grass - was warm and friendly. My worries were for nothing. Perhaps, if you are in Japan or planning to visit during the season, you’ve never considered Hiroshima as a cherry blossom destination.

The trees in Peace Park are not as dense or well-advertised as other viewing spots, even in Hiroshima itself! However, for a picnic or some thoughtful contemplation after a visit to the park’s other attractions, it is perfect. You don’t even need a groundsheet - just have a seat on one of the many benches facing the river, and enjoy the scenic beauty. 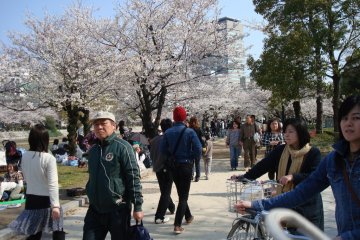 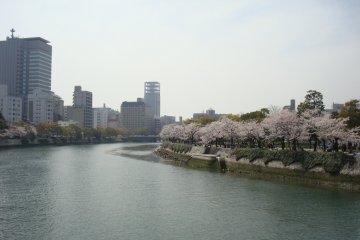 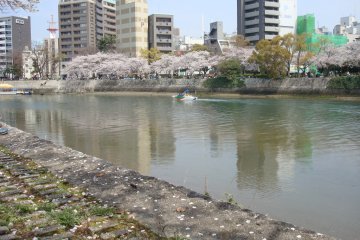 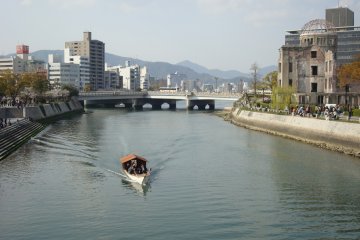