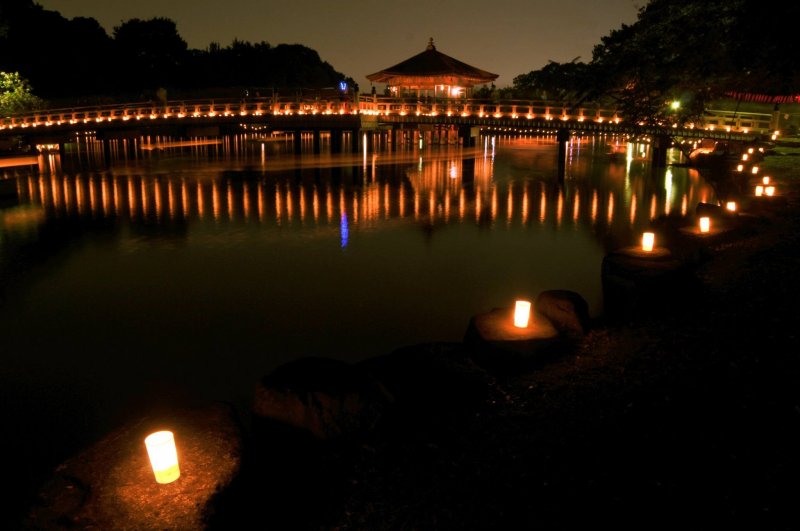 Lanterns from the Tokae and boats reflected in a pond in Nara Park (Photo: Bryan Baier)

Wish upon a lantern

Nara is home to the World Heritage Todaiji Temple, Kasuga Shrine and Nara Park. There are several fire festivals (or festivals in which fire plays an important role) at Todaiji Temple, Kasuga Shrine and a few other temples and shrines in Nara at the beginning of August. Seeing all those festivals is difficult so Nara has made it possible for many people to see and participate in a Japanese fire festival with the Tokae Lantern Festival.

"Toka" means light flower in Japanese and refers to the shape the wax of a burned out candle forms. The more flowerlike the shape the luckier it is for the person who lit the lantern. "E" is a meeting or a gathering, so Tokae is a meeting of light flowers. You're invited not only to view but to participate in the Tokae. For a donation of ¥500 anyone can light a their own lantern and place it on the festival grounds in Nara Park.

It runs from August 5th to August 14th and coincides with festivals at the aforementioned temples and shrines. It takes place all over Nara City with the majority of the events being centred around the Ukigumoenchi to the south of Todaiji. Come wish upon a lantern!

More about this festival