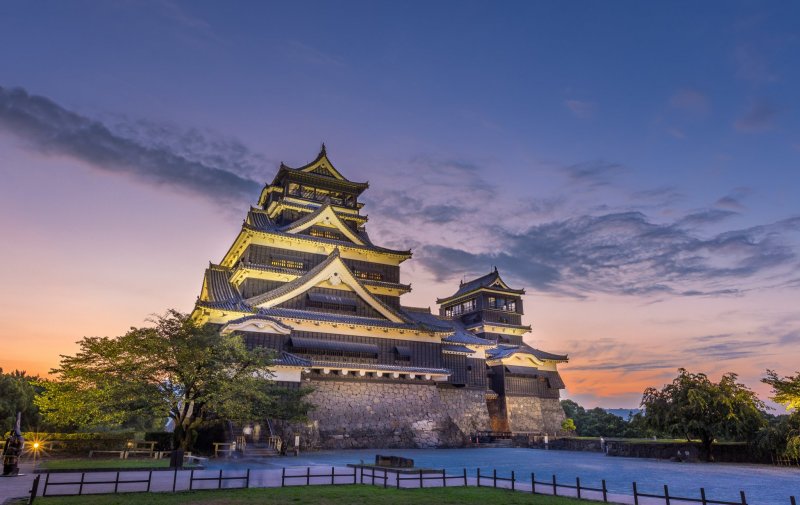 Kumamoto Castle is the third largest castle in Japan and one of its most popular historic sites. Originally built in the early 1600s by renowned castle architect Kato Kiyomasa, the fortification was burnt during the Seinan Civil War in 1877 and again sustained damage in the powerful earthquakes of 2016.

As a result of the April 2016 earthquake, Kumamoto Castle sustained heavy damage. While the inner grounds remain closed for renovation, the fortress can be admired from outside via special 400-m route on Sundays, national holidays, and select Saturdays. The inner keep is expected to reopen in Spring 2021, though the sitewide renovations are expected to take decades.

Though an earlier fortification had stood on the site since the mid-1400s, the foundations for the current incarnation of Kumamoto Castle were first laid in 1600 by local warlord Kato Kiyomasa. Having studied castle design during Toyotomi Hideyoshi’s Korea campaign, Kato constructed some of the most impressive defensive walls in the nation at his new fortress. The Kato family was replaced as lords of the region a mere half-century later and the castle came under the control of the Hosokawa clan. During the Satsuma Rebellion of 1877, samurai leader Saigo Takamori laid siege to the fortress. Despite his efforts, the inhabitants outlasted him, though the main keep mysteriously burned during the struggle. A new main tower was built in 1960, which houses a history museum and an observation deck on the top level.

Kumamoto Castle is one of the top spots for hanami, or cherry blossom viewing, in late March and early April. Around 800 sakura bloom around the Kumamoto Castle Park, drawing thousands of picnickers to enjoy the colorful spring scene.

Visitors to the city can learn a bit more about Kato’s castle building techniques, among other things, at the Wakuwaku-za, a cultural complex located in the Josaien complex at the base of the castle. An assortment of shops and restaurants make this a good stop for locally-themed souvenirs or lunch; local delicacies here include horsemeat croquettes, spicy lotus root tempura, and a vermicelli noodle dish known as taipien.

In April 2016, the Mashiki district of Kumamoto city was struck by two severe earthquakes. The disasters caused damage to several of the original watchtowers, and many of the rooftiles on the main keep were dislodged. The castle is currently closed to visitors while a 20-year renovation process is carried out. Specialists are attempting to use traditional methods and techniques to restore the castle, making it a vital project in understanding the castle construction of the feudal era. However, parts of the main keep and grounds will open for a limited time during the World Rugby Championships in October 2019.

Kumamoto Castle is the third largest castle in Japan and one its most popular historic sites. Originally built in the early 1600s by renowned castle architect Kato Kiyomasa

One of the Best: Kumamoto Castle

Kumamoto Castle has introduced a new fund raising system called, "Micro Lordship System", and has been raising donations from all over the world for the restoration/maintenance of the castle. Anybody can contribute, and the minimum donation is 10,000 yen. If you donate 10,000 yen to Kumamoto Castle, you'll receive a 'Certificate of Micro Lordship', and 'The Micro Lord Free Pass' as well as having your name written on a wooden nameplate which will be displayed inside the main tower of Kumamoto Castle forever.

Kumamoto Castle is a top destination travel site for visitors in the Kyushu region. It is Japan's third largest castle with an original 400 year old section still in tact

Castle in Kumamoto that is 400 years old built by Kato Kiyomasa. You can see the city and nature from the obesrvatory at the highest floor of the castle.

Kamakura's Hase Temple in January, just on the edge of autumn and the coming spring.

Kumamoto Castle, a magnificent castle located in southern Japan and is the pride of Kyushu has never lost its charm in any season. The summer is a good time to see its splendor and enjoy the various festivals in and around it.

Kumamoto City Government is planning to complete reconstruction of the outside of the castle tower by March 2021. It will be opened to public from October next year as each section is completed, such as the square in front of the castle tower for a fee.

A Day at Kumamoto Castle

Kumamoto Castle is a hilltop castle located in Kumamoto Prefecture. It is considered one of the three premier castles in Japan. Kumamoto Castle has thirteen structures in the castle complex that are of cultural importance.

Cherry Blossoms at Kumamoto Castle are in full bloom in the last few days of March.

Despite suffering damage during last year’s earthquake, Kumamoto Castle is still a great place to visit, especially during the colorful Cherry Blossom Season

We were really lucky, it was a beautiful day. So instead of spending our time inside the castle museum, we took our time to explore the castle grounds with all those lovely walking paths inside and outside the castle walls, which to be honest are just as impressive as the castle itself. We got all kind of different views and it was hard to pick a favorite.

A yabusame event involving Japanese archers on horseback is held every year on the grounds outside Kumamoto Castle as part of the castle's autumn festival.

Kumamoto Castle, the biggest castle in Japan, will make you feel as if you walked into a samurai movie.

The Presidential Suite room at Hotel Nikko Kumamoto has a great view of Kumamoto Castle.

Hotel with many amenities that tries to meet each customer's personality and preferences.

The Japanese are meticulous about coffee, from researching the origin of coffee beans to the degree of roasting, milling, extraction temperature, down to the design of coffee cups and even the atmosphere of the shop. Experience Japanese coffee perfection at Okada Coffee in Kumamoto.

Lafcadio Hearn was born in Greece in 1850 to a father from Ireland and a mother from Greece. He was a British explorer who came to Japan in the 18th century and became a well-known author who introduced aspects of Japanese culture to the western world . In addition to his thirty other publications, Hearn was best known for his short story book "" Kwaidan "". His writings have been praised for their authentic views of Meiji-era Japan, unbiased from its Western origins. He lived in Matsue for about a year of his life and his former residence is now open to the public, along with a museum next door dedicated to his work and person.

Kumamon Square is the" "office" "of the famous mascot Kumamon of Kumamoto Prefecture. The bear mascot was created in 2011 to improve public relations in Kumamoto. Kumamon works as an official of the prefecture and is with the dual roles of sales manager and sales manager Happiness Manager for Kumamoto Prefecture. In Kumamon Square there is an exclusive souvenir shop, there are food stalls and an event stage. In the square, visitors have numerous opportunities to take photos and experience Kumamon up close. There are also live shows to which Kumamon dances. Kumamon Square is full of trophies the popular bear received from all over Japan.

Suizenji Jojuen is a traditional Japanese landscape garden that was laid out in the late 1600s. Due to its enormous size of 64 hectares, it is often referred to as Suizenji Park. Originally it was planned by Prince Hosokawa Tadatoshi to enjoy tea there in peace Its name comes from a former Buddhist temple there, while the garden now houses a Shinto shrine in which the Hosokawa family is buried. The garden is supposed to represent the 53 stations of the old Tokaido Street, a former trade route that ran between Tokyo and Kyoto. The highlight is the miniature representation of Mount Fuji, as well as a reduced form of the Fushimi Inari Shrine in Kyoto. The tea house there originally comes from the Imperial Palace in Kyoto and is open to the public. The Suizenji Jojuen is located in the city of Kumamoto on the southern main island of Kyushu and, along with the Kumamoto Castle, is one of the city's main attractions.