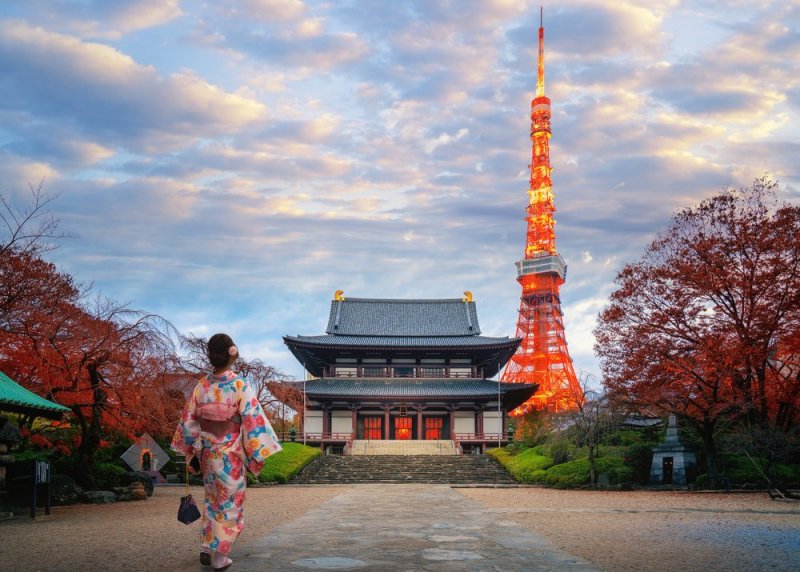 San'en-zan Zōjō-ji is a Jōdo-shū Buddhist temple in Tokyo, Japan. It is the main temple of the Jōdo-shū Chinzei sect of Buddhism in the Kantō region. [Wikipedia]

Zojo-ji was once the family temple of the Tokugawa Shoguns during the Edo period (1603-1868). Today, Tokyo Tower rises majestically above it.

If you think Tokyo's Zojoji Temple is beautiful, you should see it during cherry blossom season! Mixed with the architecture, history, and culture of the temple grounds, it's a must-see sight for anyone planning a trip to Japan.

Zojoji Temple in the spring is bright and colorful, with a mix of tradition and modernity on display. The grounds have a number of statues, including guardian deities for children.

Light a Million Candles at Zojoji

Held on the eve of the summer’s Solstice, the festival was first held in 2002. The event organizers hope that people can turn off their lights and use candles instead from 8pm to 10pm.

Zojo-ji in Tokyo during sakura season: The scene around the temple with salarymen and office ladies enjoying their bento underneath the blooming trees creates a great atmosphere.

Shiba Zojo-ji (増上寺) is located in the center of Tokyo, next to the Tokyo Tower, and only 500 meters distance from cool, exciting Roppongi.

Motsu (offal) is their signature item, and they offer not the common motsu-yaki, but stir-fried motsu with different flavors depending on the type of offal meat. The stir-fried beef Abomasum eaten with a traditional sauce passed down over many years is popular.

One of the long-established restaurants in the area, it is always packed. But since there are also seats on the second floor, customer turnover is quick. The Spicy Beef Tendon Stew made by stewing high-quality meat from the neighborhood butcher with Korean spices is popular.

This restaurant offers a selection of foods that will keep you drinking, such as stew made with fresh meat and stir-fried offal, etc. You'll want to enjoy them with makgeolli, or Junnama Makko-bee that combines makgeolli and beer.

With over ten attractions and shops, this indoor theme park is sure to make fans of the popular Shonen Jump series smile along with Captain Luffy D. Monkey. Opened in 2015, Tokyo One Piece Tower offers games, attractions, restaurants, and shops all related to that infamous Straw Hat Crew of the One Piece universe. Visit Tongari Island (so named for the shape of Tokyo Tower that houses One Piece Tower as tongari means pointed) and play along with the pirate crew in their themed attractions. From slashing through cannonballs with Zoro to gambling at a casino house with Nami, every member of the Straw Hat Crew has their own experience for fans to engage in. Enjoy live shows that change every couple of years. Afterward, be sure to visit the shops for some original merchandise you won't find anywhere else. And dine in style at Sanji's Oresama Restaurant.

Tokyo Tower (東京タワー, Tōkyō tawā) is the tallest self-supporting steel structure in the world, this orange-red radio tower (modelled on Paris’ Eiffel) defined the skyline of Tokyo for many years, and even though its broadcasting duties have been supplanted by the Tokyo Skytree, it will likely continue to be dear to residents and visitors for years to come. Recently, a Showa-era nostalgia boom has come about in Japan, primarily for the 1950s, 60s and 70s eras, and the Tower was built during those post-wartime years, in Showa 33 (1958). You may have seen it under construction in the popular 2005 film Always Sanchoume no Yuuhi or giving a sense of place to dozens of other films set in the capital. You can also view a history in photos of the Tower on your way down from its observation decks. The Main Observatory at the 145 metre mark is Tokyo Tower’s biggest draw. Offering a 360-degree view of the city, the Observatory features large glass windows and a few small glass panels in the floor, a cafe, gift shop, the Club33 stage for live shows, computer stations to take you through time-lapses and city maps, and markings on the walls to help direct you to major sights. On a very clear day, it’s even possible to see Mount Fuji from here. The Special Observatory is a step up in quality, reflected by the extra admission price. Located at 250 metres above ground, it is a circular deck with a much smaller amount of foot traffic and breathtaking views. Unfortunately, there aren’t as many features on the upper part of the tower as one might hope for the ticket price – especially given that there is often a long lineup for admission. In the building below the tower, however, known as FootTown, there is plenty more to do. On the first floor, where the Observatory elevators are located, you can also find an enormous aquarium, official "Tower Restaurant," a FamilyMart convenience store and souvenir shop. The second floor is a bazaar-like shopping area with plenty of tourist merchandise and gift stands, five restaurants and a food court with fast food. The third floor’s main attractions are the Guinness World Records Museum Tokyo and the Tokyo Tower Wax Museum, both popular among visitors. The Wax Museum has been severely showing its age in recent years, but is still a delight to see. A hologram gallery, cafe and a few other shops can also be found on the third floor. The top floor is mostly occupied by Nippon Square, and also features a small game arcade. The attractions change occasionally, as Tokyo Tower is constantly seeking ways to bring in more visitors. There’s something irreplaceably iconic about visiting Tokyo Tower itself – if you take a visit to Japan and skip the Tower in favour of the view from the Mori Building or one of the other skyscrapers, you may later regret it!

Hamarikyu Gardens is a traditional landscape garden located on the edge of Tokyo’s Sumida River. During the Edo Period (1603-1868), the grounds were used by successive members of the Tokugawa Shogunate. A small residence was built and the shoguns and their retainers would use the duck hunting ponds on the grounds for sport. The garden changed hands during the Meiji Restoration and became the property of the Imperial Family, with the new name of Hama Detached Palace. After suffering damage during both the Great Kanto Earthquake of 1923 and the air raids of 1945, the garden was given over to the city and opened to the public in 1946. Today, Hamarikyu is one of the nine gardens in the Tokyo Metropolitan Garden system. The garden encompasses 62 acres on the edge of the Tsukiji and Shiodome neighborhoods. The garden’s large pond is the only remaining seawater pond in Tokyo, and sluice gates in the garden regulate the water level based on the tide. A beautiful spot for a restful break in the garden is the Nakajima Tea House, which sits on an island in the garden’s main pond. The teahouse serves a cup of green tea and a selection of traditional sweet to visitors who prefer to enjoy the views with a bit of a refreshment. In recent years, the city has also made great strides in reconstructing several of the historic tea houses that formerly stood in the garden. Both the Matsu no ochaya (Pine Tea House) and the Tsubame no ochaya (Swallow Tea House) have been rebuilt and stand ready to welcome visitors. While the park is beautiful in any season, it is particularly known for its February display of plum blossoms and nanohana (rapeseed). One of the most impressive plants in the garden, however, is the 300-year-old black pine right inside the main gate, whose beauty remains constant no matter the season.