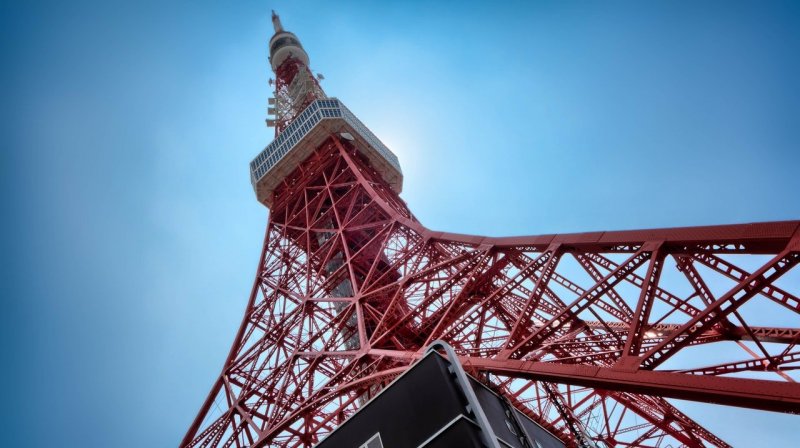 Tokyo Tower (東京タワー, Tōkyō tawā) is the tallest self-supporting steel structure in the world, this orange-red radio tower (modelled on Paris’ Eiffel) defined the skyline of Tokyo for many years, and even though its broadcasting duties have been supplanted by the Tokyo Skytree, it will likely continue to be dear to residents and visitors for years to come.

Recently, a Showa-era nostalgia boom has come about in Japan, primarily for the 1950s, 60s and 70s eras, and the Tower was built during those post-wartime years, in Showa 33 (1958). You may have seen it under construction in the popular 2005 film Always Sanchoume no Yuuhi or giving a sense of place to dozens of other films set in the capital. You can also view a history in photos of the Tower on your way down from its observation decks.

The Main Observatory at the 145 metre mark is Tokyo Tower’s biggest draw. Offering a 360-degree view of the city, the Observatory features large glass windows and a few small glass panels in the floor, a cafe, gift shop, the Club33 stage for live shows, computer stations to take you through time-lapses and city maps, and markings on the walls to help direct you to major sights. On a very clear day, it’s even possible to see Mount Fuji from here.

The Special Observatory is a step up in quality, reflected by the extra admission price. Located at 250 metres above ground, it is a circular deck with a much smaller amount of foot traffic and breathtaking views.

Unfortunately, there aren’t as many features on the upper part of the tower as one might hope for the ticket price – especially given that there is often a long lineup for admission. In the building below the tower, however, known as FootTown, there is plenty more to do. On the first floor, where the Observatory elevators are located, you can also find an enormous aquarium, official "Tower Restaurant," a FamilyMart convenience store and souvenir shop. The second floor is a bazaar-like shopping area with plenty of tourist merchandise and gift stands, five restaurants and a food court with fast food. The third floor’s main attractions are the Guinness World Records Museum Tokyo and the Tokyo Tower Wax Museum, both popular among visitors. The Wax Museum has been severely showing its age in recent years, but is still a delight to see. A hologram gallery, cafe and a few other shops can also be found on the third floor. The top floor is mostly occupied by Nippon Square, and also features a small game arcade. The attractions change occasionally, as Tokyo Tower is constantly seeking ways to bring in more visitors.

There’s something irreplaceably iconic about visiting Tokyo Tower itself – if you take a visit to Japan and skip the Tower in favour of the view from the Mori Building or one of the other skyscrapers, you may later regret it!

The closest station is Onarimon Station on the Mita Subway Line.

The iconic orange-red Tokyo Tower, modeled on Paris' Eiffel, has defined the skyline of Tokyo for many years.

The Skytree may have replaced the Tokyo Tower as a transmissions tower, but it still continues to have its place in our hearts, for visitors and long time Tokyo residents alike. A photo story at night-time.

Tokyo Tower has been a magnet for giant monster battles.

In Love With Tokyo Tower

The iconic orange-red Tokyo Tower, modeled on Paris' Eiffel, has defined the skyline of Tokyo for many years.

The Excitement of Tokyo Tower

The excitement of Tokyo Tower and the 360 degrees surrounding views of the city.

Tokyo Tower: See Tokyo From Above

Tokyo Tower is a communications and observation tower. Inspired by the design of the Eiffel Tower, Tokyo Tower stands at an impressive 332 metres.

At the Base of Tokyo Tower

Completed in 1958, Tokyo Tower stands firm as an iconic image of Japan that is known worldwide.

Kokoro no Kintsugi 2 - Talking about the cyclists' gateway of Shimanami Kaido with a visit to Tokyo's landmark, Tokyo Tower.

My Visit to Tokyo Tower

It was interesting to see how the city of Tokyo had grown around Tokyo Tower during its 60-year history.

With over ten attractions and shops, this indoor theme park is sure to make fans of the popular Shonen Jump series smile along with Captain Luffy D. Monkey. Opened in 2015, Tokyo One Piece Tower of...

Motsu (offal) is their signature item, and they offer not the common motsu-yaki, but stir-fried motsu with different flavors depending on the type of offal meat. The stir-fried beef Abomasum eaten with a traditional sauce passed down over many years is popular.

One of the long-established restaurants in the area, it is always packed. But since there are also seats on the second floor, customer turnover is quick. The Spicy Beef Tendon Stew made by stewing high-quality meat from the neighborhood butcher with Korean spices is popular.

This restaurant offers a selection of foods that will keep you drinking, such as stew made with fresh meat and stir-fried offal, etc. You'll want to enjoy them with makgeolli, or Junnama Makko-bee that combines makgeolli and beer.

San'en-zan Zōjō-ji is a Jōdo-shū Buddhist temple in Tokyo, Japan. It is the main temple of the Jōdo-shū Chinzei sect of Buddhism in the Kantō region. [Wikipedia]

The Mori Art Museum in Roppongi has set itself the goal of being a place of fun, stimulation and discussion - a place where what is important in culture and society is openly discussed. Not only through the exhibitions that are shown there, but also through a wide range of educational programs. It appeals to an audience that ranges from young schoolchildren to college students and seniors, from people who live in regional society to all over the world. The operators of the museum also consider it their task to create a platform for the artists from the region. Since opening, the museum has received high critical acclaim for its wide variety of unique exhibitions, many of which are centered on cosmopolitan themes.

Roppongi Hills is one of the largest real estate complexes in Japan, based in Roppongi, Minato-ku. The building complex designed by Minoru Mori and opened in 2003 consists of offices, stylish apartments, shops, restaurants, cinemas, a museum, an art gallery, a hotel, a TV studio, an outdoor amphitheater and a few parks, the office floors house leading companies in the IT and financial sectors, making Roppongi Hills a symbol of the Japanese IT industry. In the center of Roppongi Hills is the 238-meter-high Mori Tower, one of the tallest buildings in the city. On the top floors there is an observation deck that offers a beautiful view of Tokyo and a modern art museum focusing on new artistic ideas from around the world. There are numerous shopping opportunities throughout the complex and there is also a large Toho Cinemas cinema showing both Japanese and international films.