Chanko-Nabe in the Sumo Town of Ryogoku

Fancy having a taste of what sumo wrestlers eat in sumo town? Look no further than Ryogoku in Tokyo!

For sumo fans, Ryogoku (両国) is a place you would not miss. In Japan, there are six Grand Sumo tournaments taking place each year, of which three are held at the Ryogoku Kokugikan (両国国技館) in January, May and September.

If you happen to be in the area during the rest of the year outside of the Tokyo sumo season or aren't a sumo fan in the first place, there's still a lot which Ryogoku can offer, including the signature Chanko-Nabe which sumo wrestlers eat as part of their weight gain programme.

The dish contains a dashi or chicken broth soup base with mirin or sake. Although there is no fixed recipe as to what goes into the soup, the majority of the ingredients are protein sources such as chicken, fish, tofu and vegetables. Any leftover broth is eaten with somen or udon.

Chanko-nabe itself is considered a healthy dish but sumo wrestlers are said to consume this in huge quantities with rice and beer in order to increase their calorie intake. During sumo tournaments, chanko-nabe would contain chicken only because of the belief that a sumo wrestler should always be on two legs like a chicken and not on all fours as if sprawled on the floor.

In the Ryogoku area, there are many restaurants specialising in chanko-nabe and many are said to be operated by retired sumo wrestlers. I can't say which place offers the best version of the dish but here's an introduction about a place which is easy to access and has a sumo ring, or dohyou (土俵), right in the centre of the restaurant.

Hananomai Ryogoku Kokugikanmae Ten (花の舞両国国技館前店) is located just outside the west exit of JR Ryogoku station so it will be hard to miss it especially if you are heading to nearby attractions like the Ryogoku Kokugikan or Edo-Tokyo Museum. Outside the restaurant, there are some mock food displays where you can see the ingredients used in each type of chanko-nabe. Of course, if you order a more expensive set which can easily cost more than 3,000 yen before tax, you can enjoy a wider variety of ingredients including seafood such as lobsters which usually do not appear in chanko-nabe. On the other hand, if you get a basic set, it should cost less than 1,000 yen before tax.

The portion featured in the photo above is for one person and contains ingredients such as chicken, leeks, carrots, mushrooms, spring onions, deep fried tofu served in a wooden bowl. Once the broth comes to a boil, you can then add the ingredients to the pot and wait for them to be fully cooked before tucking in. If you feel that this is not enough for you, go ahead to order the zosui or udon set which you can eat with the leftover broth. There are four broth options i.e. spicy, miso, shoyu and shio for you to choose from. During my visit to this restaurant, I chose the shoyu base and thought that it was flavourful enough without being too overwhelming.

One huge selling point of this restaurant is the sumo ring that sits in the middle of the restaurant. From time to time, they would hold events on the dohyo. Unfortunately, I was there on a quiet weekday afternoon so there was nothing in action. It should be fun to return to this restaurant on another day when there is an event going on. 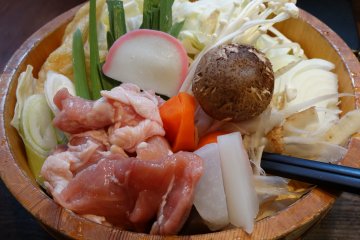 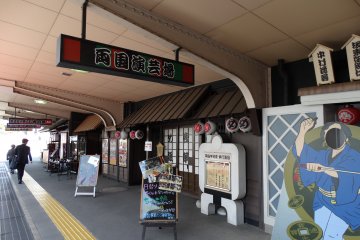 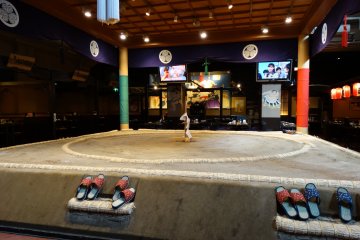