Remnants of the game of power

It seems to be a rule of nature that you cannot forever be successful, nor powerful, and so it was with Japan's status-seeking warlords. In response to the rising power of their rivals holed up in the castles of Kawagoe, Iwatsuki and Edo, the Toshima Clan, rulers of the area of Shakujii in what is now western Tokyo's Nerima City, saw fit to finally build themselves a castle in the late 14th century.

With the newly built Shakujii Castle at their backs, the old adage of your enemy's enemies are your friends saw the Toshima join forces with another clan that would put them directly in the sights of their rivals. The Toshima ended up suffering a heavy loss as a result and in refusing to honour one of the conditions of their surrender, saw their beloved Shakujii Castle attacked in force.

Eventually overrun, the Toshima line came to an end when the lord of the castle, Toshima Yasutsune, drowned himself in nearby Shakujii Pond. His daughter, the now utterly distraught Teruhime, who had just witnessed the demise of her clan, followed her father into the pond and the afterlife.

These days, not much remains of the Toshima's attempt to assert their right to power. The ruins of Shakujii Castle, such as they are, can be found in Shakujii Park and are open to the public each Culture Day on the 3rd of November. A memorial consisting of two stone monuments can be found near the ruins, the Lord Mound and the Princess Mound, for the father and daughter, respectively. The Teruhime Festival is held each year too, in memory of the young princess who lost her future in the game of power that ruled Japan in the feudal ages.

Take the Seibu Ikebukuro Line to Shakujii-koen Station. The castle ruins are about a 15-minute walk from the South Exit. 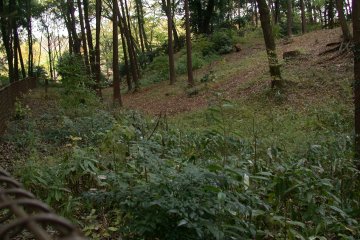