A decently affordable steakhouse in Shibuya

Shibuya's Hikarie tower holds regular 'Gourmet festivals', promoting the numerous restaurants on its sixth and seventh floors with a variety of discounts and seasonal or special dishes. During one of these I decided to try out Sizzle Gazzle, a stylish but reasonably priced steak restaurant, that also has a good range of other dishes.

It packs a lot into its limited space: there's a bar in the centre, tables by the 'windows' so you can enjoy people-watching while inside a building, a few booths, and a little raised area at one end. The atmosphere is modern and classy, with lush blue couches, soft lighting (which makes photography difficult), one wall decorated with a grid of colourful prints, a mix of modern art and what look like Mexican women from the frontier era. I liked that rather than wallpaper jazz they had a more interesting selection of music, downtempo and relaxing, among which I recognised Portishead.

For my dinner I chose the festival special, pork meatballs in Madeira wine and mushroom sauce for ¥1480, with a bowl of fries on the side, probably around ¥600 (I forgot to take a note). The meatballs were a very good size, tender and very slightly spiced, topped with lots of pleasantly chewy mushrooms; the sauce was smooth and not too rich, and the fries were crispy and light, covered with herbs and served with a garlic clove to lend some extra flavour.

Steak features prominently on the menu: a dinner set costs ¥2680, while sirloin and black steak both cost ¥1680 for 150g or ¥3180 for 300g. Also on the menu are salads between ¥550 and ¥1280, appetizers such as ajillos, onion rings and herb marinaded mushrooms cost from ¥580 to ¥850, and pasta dishes for between ¥1100 and ¥1500 include bacon carbonara and cagliostro bolognese. If you have room for dessert, there are cinnamon apple, chocolate banana and salty butter caramel pancakes (that's three separate kinds, not one monster), costing ¥980 for one person, ¥1280 for two sharing. 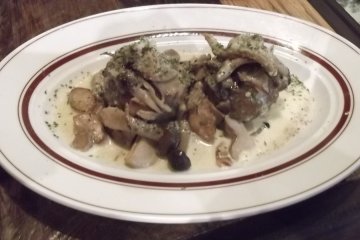 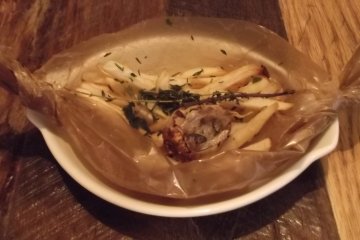 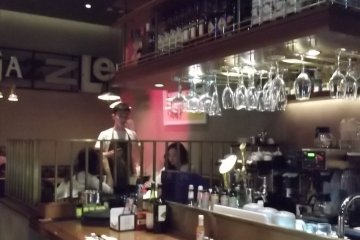 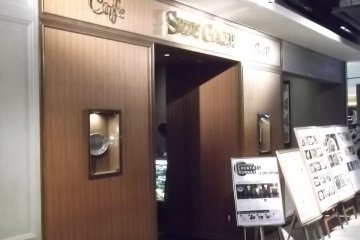 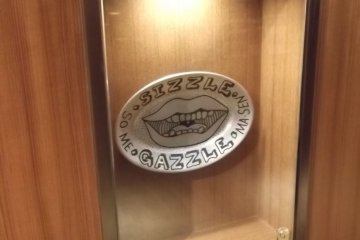