Divination and moon mysteries in Katsushika

Tateishi Kumano Shrine is a local Shinto shrine complex nestled right by a kindergarten school and the Naka River in Katsushika City. Unremarkable at first sight, a bit of background knowledge reveals the somewhat unique nature of the shrine's spiritual inclinations.

The shrine pays homage to the esoteric knowledge of onmyodo, a kind of ancient divination system based on classical Chinese philosophy. By extension, there is much respect for the system's most famous proponent, the tenth century spiritual adviser to the Emperor, Abe no Seimei. Abe was said to have overseen the ceremonial transfer of one of the deities making up the Kumano cult to the shrine at the end of the tenth century,

Adding to the sense of the mysterious, the shrine pays particular tribute to the power traditionally associated with the moon. Night visits are held each month to offer prayer and gratitude to the sense for fresh energy and new starts associated with the new and full moons. The dates for these visits can be found on the official website though the mildly curious may baulk at the ￥5000 ceremonial offering recommended.

Laid out in an occult pentagram shape (though a large part of the land has been taken up by the kindergarten), the shrine features some strongly carved stone lanterns and the traditional pair of komainu lion-dog shrine guardians. With two entrances, the vibrantly bright red torii gate on the west side stands out quite clearly amidst the subdued colours of the local area. A copper five-storied pagoda complete with its own komainu guardians and a couple of three hundred year old camphor trees add to the sense of the sacred.

Without some context, you may never realise that Tateishi Kumano Shrine in Katsushika represents a fascinating look at Japan's very multifaceted spiritual history.

Take the Keisei Main Line or the Keisei Oshiage Line to Aoto Station. The shrine is a 10-minute walk south from the station. 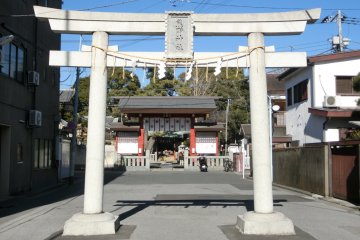 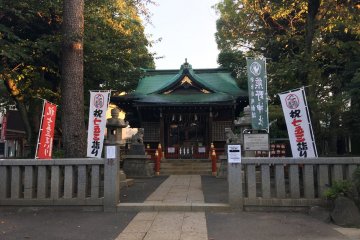 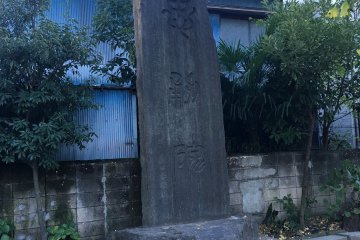