With over 137 franchise restaurants all over Tokyo, Tendon Tenya is the place to go if you want to eat cheap but good quality Tempura. Tendon, is an abbreviation for “Tempura” (deep fried fish and vegetables), and “Donburi” (a bowl dish consisting of anything you can imagine such as meat, fish and vegetables, served over rice).

Tempura is a popular food in Japan but since I’m very particular when it comes to fried food, I didn’t know where to eat good tempura. It was my friend who suggested we should go and try out one of the Tenya restaurants. We went to the restaurant in Harajuku, so all the photos featured on this article were taken there.

The customers are given both a Japanese and an English menu (great help for those who don’t speak Japanese)with photos illustrating the various dishes as well as a description of all the ingredients that the dish includes. You can also add extra tempura selections for ¥40 to ¥80 extra for vegetables and ¥100 to ¥210 extra for the different fish. Then, you get to choose the rice portion (normal or big). If you don’t want to eat rice then there are also soba and udon options. The restaurant serves miso soup, tea and pickles to garnish your food at no extra charge. Tenya restaurants have their own secret sauce, a blend of quality soy sauce and unagi (grilled eel), a sweet sauce that they consider to be one of the reasons why their tempura tastes so good. I ordered the 'All-star Tendon' that included a prawn, a large piece of squid, a maitake mushroom, a scallop, a slice of lotus root and an eggplant and I also added pumpkin for ¥70. In total my delicious food cost ¥890 (the large rice portion cost ¥100 extra). If you’re a vegetarian, the restaurant also has also options for you as you can order vegetable-only tempura.

The portions were big and the food was good. If you want to eat some delicious tempura for under ¥1000 while in Japan, then I would suggest you try out one of Tenya’s franchise restaurants.

The Harajuku branch can be easily accessed from JR Harajuru Station and it’s only 6 minutes away on foot. 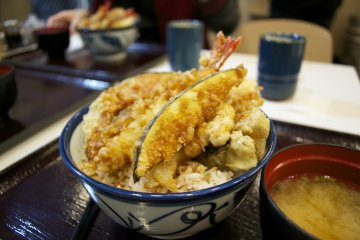 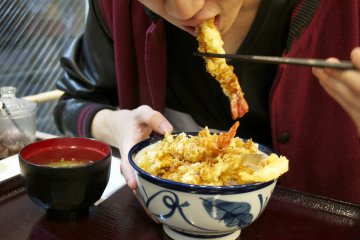 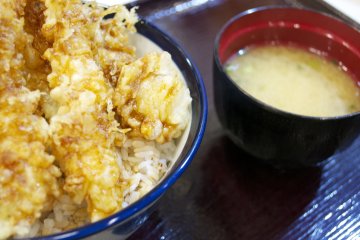