The tradition of ukiyo-e in Tokyo's Bunkyo Ward

The Tokyo Traditional Wood-Block Print Craft Association is located in Tokyo's Bunkyo Ward, not far from the more modern Printing Museum. The association consists of two double-story houses, with the woodblock printing workshop on the second floor of the front house.

The Tokyo Traditional Wood-Block Print Craft Association is formed by three groups of people: painters, carvers and printers. The president of the association is Yukiko Takahashi, who has practiced woodblock printing for more than 50 years. She was ushered into the craft by her father, who had worked a printer. But her main job nowadays is publishing, which involves providing woodblock prints to private customers as well as to museums for their exhibitions. There is also an apprentice printer working with her in the association, who taught me to make a small print during my visit.

To produce top-quality woodblock prints requires top-quality tools. The press used by professional printers is made of bamboo skin, sourced from the island of Kyushu. It can cost as much as ¥120,000. Beneath the surface of the press, the circular bamboo threads are important for applying strong and equal weight during printing. The colored pigments used in printing are made from mica, a kind of natural stone. Nowadays it is common for woodblock prints to have more than ten colors, which makes a huge contrast to the old times, when only monochrome or at most three colors would be applied.

Yukiko’s apprentice has studied woodblock printing for only two years, but his skills were already at an impressive level. After he finished part of a picture while simultaneously instructing me on the correct technique, I was invited to make a small picture of my own, consisting of three colors.

The printing process involves multiple steps. Water is first applied on the carved block itself, then a tiny amount of glue to help the color stick. Afterwards, the colors are added. A brush is used to mix all the above three elements thoroughly. The paper is then put on the block, matched up with a guide corner so as to assure a clear print.

With the press in my right hand, I tried printing a small picture. I had three colors at my disposal - black, red and blue. My first print was not that successful in that the black color was not applied very well. I had to redo the print to achieve a clearer and sharper color. After an attempt at printing all three colors, a beautiful picture emerged on my paper. The paper was then folded and fitted around a notebook as its cover. The picture was minimalist but elegant, the patterns simple but expressive. Though the paper was small, it perfectly adorned the notebook and made for an impressive take-home souvenir.

The Tokyo Traditional Wood-Block Print Craft Association does an excellent job of assisting visitors in understanding more about the long-standing tradition of this cultural craft. 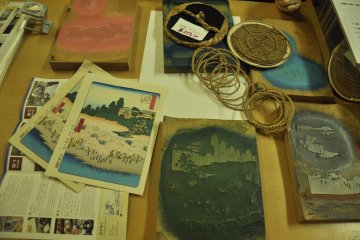 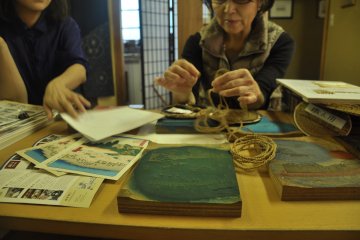 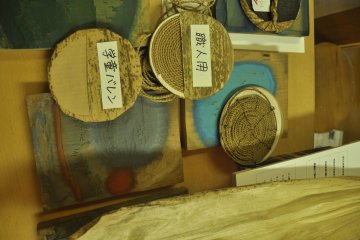 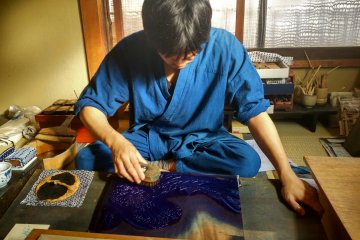 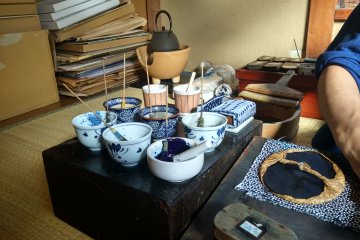