Half authentically Italian, half uniquely Japanese

When you’ve been in Japan for while, you might start to crave for something besides Japanese food. But on the other hand, since you are in Japan, you should take the opportunity to eat as much Japanese food as you can right? The solution is simple: Yomenya Goemon. This international pasta chain has been serving Japanese fusion pasta since they first opened in Shibuya in 1976.

I first tried their pasta at a branch in Singapore, and was impressed. The quality of the food is similar across their branches, in Singapore and Japan. The menu is quite wide, and has both Japanese style and more traditional Italian style pastas. They also have a variety of drinks and dessert. The pastas are served on plates, unless it is has broth, and is eaten with chopsticks.

I ordered the Tarako Cabonara, which might seem like an odd mix of ingredients, but the results were pretty good. It had a creamy sauce with slices of beancurd, roasted sesame seeds, chopped spring onions, thin strips of seaweed, a dollop of cod roe and chucks of mozzarella cheese. The pasta was not too creamy, and all the ingredients has quite subtle flavoured that came together to form a tasty dish. The portions are generous, and I couldn’t finish it. They offer half and half portions for those who want more variety, and it is enough for two people will smaller appetites. They also have sets that are accompanied by a dessert, beverage, salad or miso soup.

You can also choose from pastas with a tomato, olive oil or soy sauce base. Personally I would recommend the Japanese-inspired pastas, as the flavours are more unique. There are many other places that do fusion pasta as well, but not often as well as Yomenya Goemon.

The branch I tried was just outside Harajuku Station, near the large Nike store. You might not notice is it at first when you walk by, as the entrance is down a flight of stairs from ground level. There are many other branches around Japan you can visit, and even try them out in Korea, Taiwan, Hong Kong,China and Singapore. The average price per dish is ¥1000 to ¥1500. 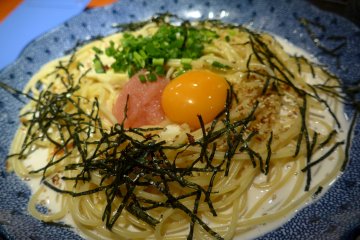 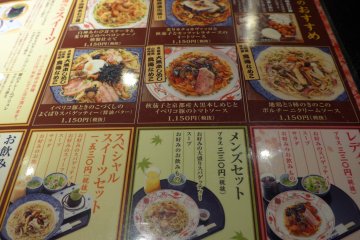 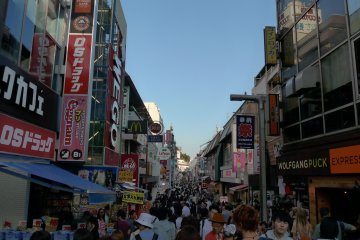