A small peek of the garden: feel like jumping out of the house to run in the moss? (Photo: Alexis Guiral)

When I arrived in Niigata Prefecture, Japan, the stories I used to read about the famous Daimyo Uesugi Kenshin and samurai Naoe Kanetsugu , both from Echigo province, nowadays known as Niigata, came straight to my mind.

Since I am a kid, I have always been fascinated by the stories taking place in the feudal Japan, the battles involving samurais, ninjas, shoguns and metsukes quenching my thirst of action and adventure. Then, as I grew up, I discovered that beyond their perfect mastery of the art of war, the Japanese were also a delicate and sophisticated people, capable of making a simple every-day task into a piece of art. From the act of enjoying tea to the one of folding paper, the Japanese culture of perfection and elegance pervaded all the domains from painting to floral arrangement, going through engraving, cutlery, good manners, gardening and architecture.

As I arrive on the parking lot outside the domain, I am light years away from knowing what awaits me behind the thick cob walls adjoining a dense vegetation that shields the dwelling from the glimpse of the curious.

After I entered the enclosure, the disorientation isn’t too immediate. I recognize a centenary wisteria that intertwines in a European-like trellis, dissimulating a restaurant that mixes up both the European style and Japanese style, standing over the white pebbled ground. If it wasn’t for the traditional Japanese sculptures and trees standing near the wall, one could have misunderstood the place with a French countryside guestroom’s courtyard.

It is in that restaurant that I get for the first time the opportunity to taste the famous Koshihikari rice from Niigata, considered as the best in Japan, and cooked in a traditional way in a small tin pot. It comes with a few typically Japanese seasonal delicacies: as the fall is coming, the flavors of rhubarb, sweet potato and Japanese pear called Nashi (梨) set ablaze my palate with their meltingly soft and warm taste. It reminds me of the Shirone orchards, where the visitors can freely wander around and pick the grapes, Nashis and strawberries that grow there according to the seasons.

The lush vegetation that shields the buildings piques the wanderer’s curiosity, encouraging him to explore the domain’s every nook and cranny. And he shall never be disappointed. After taking my shoes off to enter the house, I penetrate into a period kitchen room in which hangs a teapot used for ceremonies. The furnaces, big enough to cook for seventy people, await here patiently to be used once again.

For this place, during its golden age, was teeming with activity: there would live the members of the Ito family, the biggest landlords in the Meiji Era, and their servants. More than 78 overseers were necessary to the management of the 2800 tenants that would cultivate on the 1370 hectares (Ha) of paddy fields and the 1000Ha of forests owned by the family, without counting the servants responsible from the maintenance of the house and the three gardeners specifically in charge all year long.

This prosperous period ended in 1946, as the Land Reform act compelled the family to shrink its territory to only 3Ha of paddy fields and to give up its house to the government, which is still nowadays in charge of the maintenance.

Although still little known among the occidental public, the prefecture of Niigata overflows with such unique places, mainly visited by Japanese people anxious to discover their country’s gastronomy and its “off the beaten tracks” places.

The tatamis, delicately weaved and comfortable under the feet, form with the motley items gathered under glass cases the furniture of the dwelling. This place is called the museum of Northern Culture, however it rather feels like a cabinet of curiosities, the confined and reassuring atmosphere provided by the massive cedar framework inviting the visitor to get amazed by these objects as if he discovered them at a longstanding friend’s showing him his personal collection.

To tell the truth, the museum is relegated to a position of secondary importance compared to the beauty of the house, and especially of its garden. It is when I enter the 120 tatamis room that I fully realize how magnificent it is. It is not mere coincidence if this room was provided for literary and artistic activities. Like the frame of a painting, the rectangular structure of the room leaves one glaring at the beauty and grace of this explosion of autumnal colors.

This masterpiece is the work of the famous landscape artist Taiami Tanaka, who also designed a few famous gardens in Tokyo. If we can say one thing, it is that he earned his reputation fairly: after three years of hard work, he turned this place into a pure jewel of stones, moss and streams.

The knobbed branched trees craving for the best places to the sides of the mossy stones, the tumultuous waterfalls flowing in a pound where carps wander peacefully, the rocks erecting in the middle of the bushes takes the rambler to a genuine scene of fairy, magic and ancestral spirits tale.

One feels completely immersed in a bubble, in the middle of an oneiric and generous nature. If it wasn’t for the absolute perfection, the precision of the trees disposition minutely planted so that they arouse curiosity by dissimulating some parts of the garden, and the incredible cleanliness of the place, one could have thought it isn’t the result of the control of the human on nature. And if the landscape artist that tries to imitate nature is the student who seeks to outdo his mentor, then we can in this case say that he managed to achieve his ends.

As a gentle breeze flies through the open room, I delight in imagining myself installing on the central stone of the garden with a calligraphy set; wandering in the corridors where every step produces a melodious groan, as if the house was breathing, I appreciate the majesty of the place through all my senses. I enjoy the sweet scent of the 30 meters long massive cedar beam that runs through the corridor, and the delicate fragrance of wet moss that comes from the outside. Every detail, mark in the wall, small shrine hidden in the ceiling, opal glass and wooden panels are as so many remembrances of history that make of this edifice an absolute ode to refinement and tradition.

Let’s state by the way that Niigata, thanks to its location at the foot of the mountains and near the ocean that assures an unrivalled water quality, owes its prosperity to its superior quality rice, fish and sake. We would be glad to welcome you in our wonderful city! 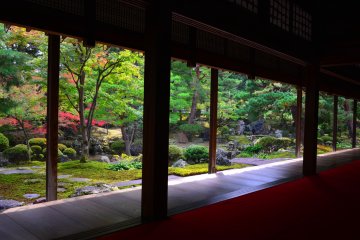 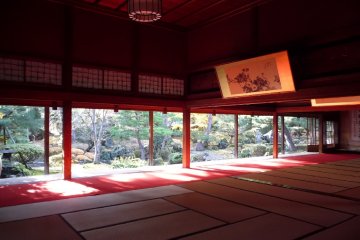 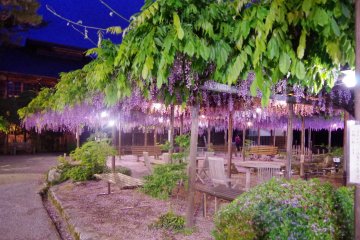 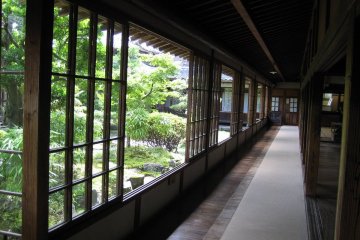