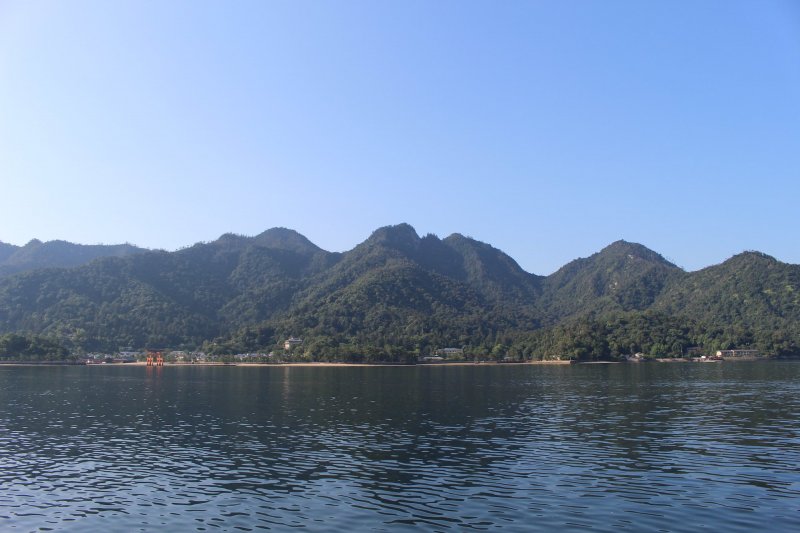 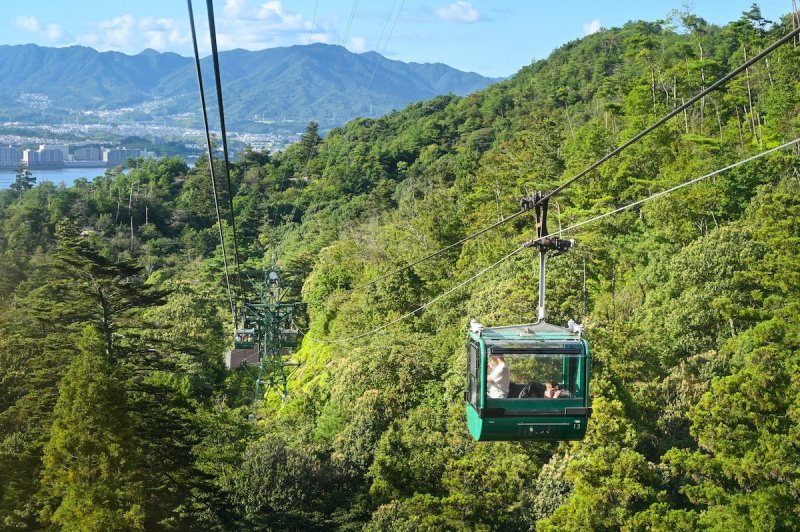 Twenty minute journey from the base of the mountain (includes one transfer). Operates 9am-5pm, ¥1000 one-way or ¥1800 return.

Mt. Misen is the highest peak on Miyajima Island. The huge boulders on top of this mountain were holy to the Shintoists who built the shrines on Miyajima.

Holy Mount Misen on Miyajima can not only be explored on foot, but also more conveniently by ropeway to enjoy fresh forest air and breathtaking views from the top.

Mt. Misen (Miyajima) is considered to be a sacred mountain, standing just north of Itsukushima Shrine.

Mt. Misen on a Beautiful Day

On Top of Miyajima

A UNESCO world heritage site, the gate at Miyajima is one of the most heavily photographed objects in all of Japan.

Extracted article from "Revolutions" on Miyajima.

Mt. Misen is the highest place on Miyajima Island and on a clear day provides breathtaking views of the Seto Inland Sea. Breathtaking because of the deep blue undertones of the sea in contrast to the vibrant greenery of the mountains but also from the heavy breathing experienced once you are at the top.

Auberge Watanabe in Miyajima is conveniently located right in front of the entrance to the Daisho-in Temple grounds, on a quiet side street next to a stream.

Backpackers Miyajima is located in the Hatsukaichi city are of Hiroshima, right next to the ferry which takes you to the beautiful island of Miyajima.

Kiyomori-Chaya restaurant stands on a little island near Itsukushima Shrine on Miyajima. It's ideal for a restful lunch or tea break.

Hayashi-ya is located on a back street in the charming residential area of Hiroshima's most famous, Miyajima island, this small cafe-restaurant specializes in high quality

Daishō-in or Daisyō-in is a historic Japanese temple complex with many temples and statues on Mount Misen, the holy mountain on the island of Itsukushima, off the coast of Hatsukaichi, Hiroshima, Japan. It is the 14th temple in the Chūgoku 33 Kannon Pilgrimage and famous for the maple trees and their autumn colors. [Wikipedia]

Momijidani Park (紅葉谷公園, Momijidani-Kōen) is one of the most famous maple leaves valley parks in Japan. The park is located at the foot of Mt. Misen, along Momijidani River, behind Itsukushima Shrine in Miyajima, Hiroshima. [Wikipedia]

The Itsukushima Shrine is located on the shores of Miyajima, an island in the Seto Inland Sea not far from Hiroshima city. While the name Itsukushima means “island of worship”, the site is more famously known as “the floating shrine”, as the buildings appear to be floating on the water when the tide rolls in. Itsukushima’s main shrine was first constructed in AD 593, and was mentioned in a famous Japanese book (Nihon Koki, or Notes on Japan) in AD 811. The shrine became popular as a pilgrimage destination for members of the Imperial Court during the Heian Period (745-1185) and remained an important location in the Edo Period for those living in western Japan. The main shrine precinct consists of a collection of buildings, such as the Purification Hall and the stage for bugaku (court music) performances. Many of the buildings are linked by covered corridors and dotted with bronze lanterns from the early 20th century. An arched bridge, dating back to 1557, was said to be used by Imperial messengers and is one of the links between the shrine and the mainland. Most notably, Itsukushima is home to a Noh stage that dates back to the early Edo Period, and is significant for the fact that it’s the only Noh stage in the country that floats upon the sea. Due to their history and unique design, the buildings of Itsukushima Shrine were designated as a National Treasure in 1952 and became a UNESCO World Heritage Site in 1996. Visitors who wish to see the shrine as it “floats upon the waves” would do best to plan their visit according to the tides. A schedule of the day’s high and low tides is usually posted at the shrine’s main entrance.