A tribute to Matsuo Basho

Soon to be served on bed of perfectly steamed rice, the fresh seafood straight out of the ocean was the only thing on my mind as I headed towards Tokyo's Adachi Market in southern Kita Senju. But like everywhere else in Japan, thinking about only one thing inevitably leads you to another and it never occurred to me that I would come across a tribute dedicated to Japan's greatest haiku poetry master, Matsuo Basho.

Just outside the entrance to the market lies a small memorial park. A tiny public space known as the Senju Juku Oku no Hoso Michi Terrace, the memorial marks the starting point of the old Nikko Kaido highway that once linked Edo to Nikko in the north. A small stone marker notes that Nihonbashi, the central point of cartography in the Edo Period, lies to the right while Soka, the second stop on the old highway, lies to the left.

In 1689, Matsuo Basho began a journey north into what was then Japan's wild regions and the first stop on his travels was right here in what is now called Kita Senju. The park features a slightly stylised but sturdy stone statue of the famous master holding a parchment and though no longer there, what may have been a wooden writing brush. Referencing the poet's masterpiece work, the background signage reads "Senju Juku Oku no Hoso Michi" or, "Senju Post Station, the Narrow Road to the Interior."

Not short on admirers, the works of Matsuo Basho have moved beyond Japan's borders to find homes all around the world. And while his fans are legion, it says something indeed that the master poet still has a position of respect in his home land.

Take the Keisei Main Line to Senjuohashi Station for a 5-minute walk to the tribute park. Walkers can take the Tobu Skytree, Tsukuba Express, Chiyoda, Hibiya or JR Joban Lines to Kita-Senju Station instead for a 10 to 15-minute stroll. 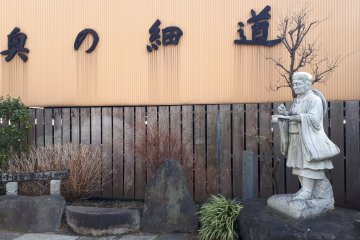