Tonkatsu is one of the most famous Japanese dishes. Traditionally the fried pork cutlet can be served over a bowl of rice with egg, by itself with cabbage, or with a side of curry. But two restaurants in Kichijoji have their own version of the Japanese classic and both taste amazing.

Just outside Kichijoji station lies a tiny shop that can be easily overlooked. Tare Katsu is a small restaurant with a few locations in Tokyo and their speciality is a pork katsu recipe that is a Niigata speciality. The restaurant is small, with a few tables and the normal counter bar that fits about 8 people. The restaurant seems catered to the working people of Tokyo: No entertainment, no overly talkative chefs, and no mingling. Just a restaurant that serves an amazing speciality dish.

Unlike the traditional tonkatsu, the Tare Katsu cutlet is about half the size of a normal pork cutlet. The cutlet is dipped into a mildly sweet soy sauce (Tare) and is dripped over rice. The pork is tender and falls apart when eaten. There is a choice between the type of pork with the first being a normal pork cutlet, and the other being hirekatsu or pork fillet. The pork fillet has most of the fat trimmed off and is a bit more tender in texture. There is no wrong choice between the two as they are both amazing. Different fried vegetables can be added to your meal and a double order of pork can be ordered as well.

There are maybe two or three restaurants in Tokyo that sell burritos. They're usually small, nothing compared to insanely large and delicious burritos of California, and the taste just never seems to be quite right. That's not necessarily a bad thing because Tokyo has found a solution for people looking for a delicious burrito: Marukatsu Shokudo. Marukatsu make their own pork katsu burrito. Taking a cue from Chipotle, Marukatsu presents their food as fresh and healthy. And surprisingly so, the burrito actually does taste healthy.

The pork cutlet is extremely tender and moist, with not too much batter. The cutlet is then covered with a choice of sauce: Marukatsu's special sauce, or regular tonkatsu sauce. Lime rice, lettuce, cabbage, beans, and basil pesto are then added to the burrito. The overall taste can be described as balanced, fresh and unbelievable delicious. This base dish is also served as a burrito bowl. A pork katsu is available in the traditional form with white rice, and also with curry. 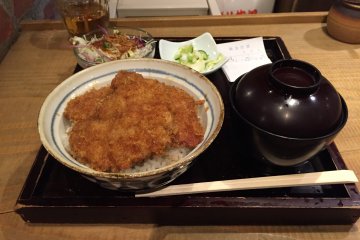 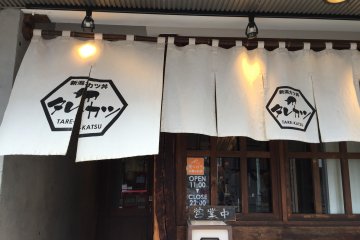 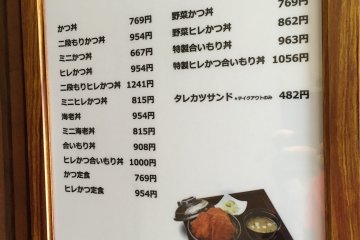 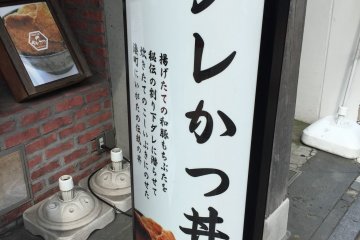 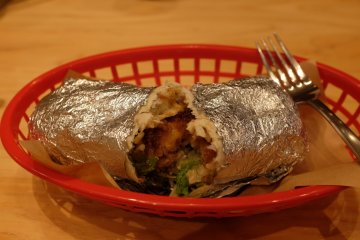 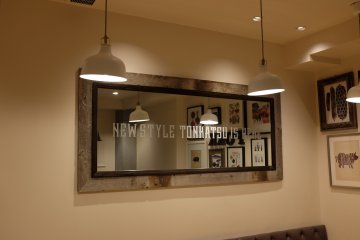 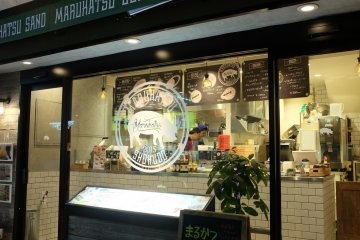