Reclaiming land for the public good

Reaching back into the 12th century in Kobe and continuing until now in Tokyo, Japan has never been a stranger to land reclamation. Quite a few of the country's famous sites sit atop land that was once sea or seemingly unusable.

Nagasaki's Dejima, an island that once housed the non-Japanese community during the Edo Period is entirely human made. Tokyo's Disney Resort, too, sits atop reclaimed land and so does the now famously inviting Odaiba. It should come as no surprise then to learn that Shibaura Chuo Park is also reclaimed land.

Seen by many as an oasis in a concrete jungle, Shibaura Chuo Park is a popular spot for the locals to relax and recharge. Being surrounded by a water treatment plant may not seem like the most inviting of inspirations to visit but the park itself is quite clean, spacious and, well, nice.

The healthy-minded will be glad to know that Shibaura Chuo Park offers sports and exercise facilities through the Minato-ku Sports Centre. A dog run area is a feature too for the many people with canine buddies. Children are certainly not forgotten with their own play areas to enjoy.

While not classically traditional in design, the park features a number of flower gardens including a wisteria pergola, a pond as well views of Tokyo Tower. The gardens make for a pleasant atmosphere whilst strolling through the park and the open spaces offer relief from the population crush of central Tokyo.

Located close to JR Shinagawa Station, Shibaura Chuo Park is a modern example of Japan's talent for turning something unwanted into something useful.

Take the JR Yamanote Line to Shinagawa Station. The park is a 10-minute walk from the East Exit.

Alternatively, take Toei Bus 92 or 95 from the East Exit of Shinagawa Station and get off at Shibaura Chuo-koen Iriguchi or Takahamabashi bus stops. 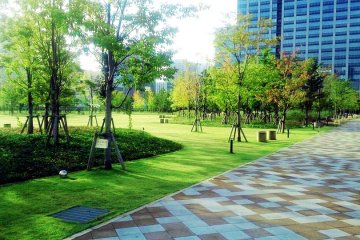